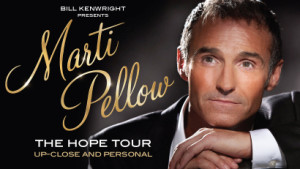 Marti Pellow will be bringing an intimate evening of music to Milton Keynes Theatre this weekend, including West End and Broadway songs from his stunning new album Hope, as well as some Marti favourites. Marti Pellow, multi-platinum selling solo artist and Wet Wet Wet front man makes his hotly anticipated return to the UK touring circuit to promote his eighth album Hope, a collection of some of the greatest and most inspiring songs in musical theatre. As a solo artist, and with Wet Wet Wet, Marti has had unrivalled chart success with over 25 hits and three of the UK’s biggest number one singles, including the seminal Love Is All Around. As well as a critically acclaimed solo career, Marti has gone on to star in the West End, on Broadway and on National UK Tours in the smash-hit stage musicals Blood Brothers, Chicago, The Witches of Eastwick, Jekyll and Hyde and The War of the Worlds.