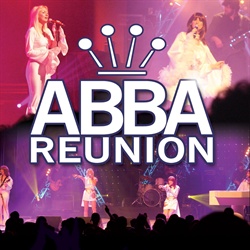 Having taken Europe by storm in 1974 when they won the Eurovision
Song Contest with Waterloo, ABBA went onto top pop charts worldwide for well over a decade.  Their much-loved songs have featured in some of the most popular films of the past thirty years including Muriel’s Wedding and The Adventures of Pricilla, Queen of the Desert.

In 1999, their songs were adapted into the phenomenally successful musical Mamma Mia which has grossed over $2 billion worldwide and introduced a whole new generation to hit songs including “Knowing Me, Knowing You”, “Take A Chance On Me”, “Thank You for the Music”, “Money, Money, Money”, “The Winner Takes It All”, “Voulez Vous” and “SOS”.

ABBA REUNION is one of Europe’s leading International tribute Shows.
Now in it’s 10th year, the show has become Internationally recognized as one of the top world-class authentic ABBA experiences, not to be missed!

The wonderful lyrics and music penned by Benny Andersson and Björn Ulvaeus are recreated by all six performers on stage with the main focus on Agnetha and Frida whose differentiating voices helped create that sound. Superbly accurate vocals, mannerisms, outstanding authentic choreography and a full live-band, combined with stunning replica costumes captivates audiences from the opening refrain to the final sing – along chorus of this two – hour spectacular.

Abba Reunion at the Gordon Craig Theatre, Stevenage on Sunday 19th May.