Bringing with it all the luck of the Irish, Lord of the Dance: Dangerous Games comes to Milton Keynes Theatre 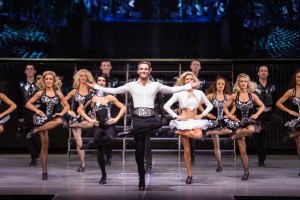 Milton Keynes Theatre will be thrumming to the beat of the bodhran and rocking to feisty flights of fiddle fancy as Michael Flatley’s Lord of the Dance: Dangerous Games storms its way into town this week.

Following a sold out run at the London Palladium in 2014, Flatley’s new show has been wowing audiences in London’s West End at the Dominion Theatre.

Now Dangerous Games has taken to the road and while Michael Flatley himself is only scheduled to make an appearance at a very few performances in selected venues, he has total confidence in his young and talented touring company to continue to present his spectacular entertainment with total flair and extraordinary panache everywhere they go.

“These will be my final performances in the UK and Ireland” says Michael.
“After years of punishment my body just can’t take any more! But it’s my dancers who are the real stars. Some of them have been with the company for ten years and I’m immensely proud of their hard work and dedication,.”

Flatley’s new show, Dangerous Games, features exciting and ground-breaking new technology, including holographs, dancing robots and world champion acrobats as well as the greatest team of Irish Dancers in the world.
A brand new score composed by Gerard Fahy, striking new costumes and special effects lighting add a breath-taking state of the art dimension to the original global masterpiece that has been seen – and loved – by millions the world over. 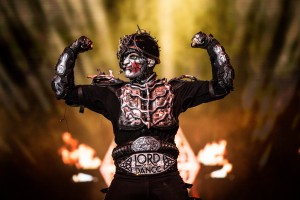 I was in the audience for the opening night on Tuesday and I guess all the diehard Irish Dance officianados were there too – and they loved it! Unfortunately the Lord of the Dance company management couldn’t see their way clear to sparing a programme or even a cast list for the press, so I won’t be able to name any of the dancers. But you know what’s-his-name that danced the lead (I imagine originally the Michael Flatley part) well he carried the show well and his dancing was superb! As did thingmy-bob who danced the villian and their duets were great. There was a girl singer who came on three or was it four times to slow things down a bit – managing to bring it all down to a sort of variety show. I really didn’t feel that any of her songs helped move the story(?) along at all. There were also two very fine violinists, but quite honestly as the effects and sound were already so over the top we weren’t quite sure if they were playing live or not! The same with the enhanced sound of the tapping from the dancers’ shoes, it could easily have been on a click-track in which case there was some extremely clever foot-syncing from the dancers!

The show opened with a larger than life hologram of Michael Flatley himself on the huge screen starting the proceedings. Speaking of the screen, it covered the entire back wall of the MK stage and the rostrum & steps. Some very picturesque and imaginative films are shown (in place of sets) during the whole show. Most of them were very effective and to say the least dramatic – I even loved the unicorn that repeated its movements as if on a loop tape! This technological setting was – although well made, in danger of becoming distracting, I found myself watching its various changes throughout one number from the girls!

Its a fact that some of the best musicals have a fairly weak story-line and this show proves the point. There’s good and there’s evil and good wins – that’s it.

I know that Mr Flatley has the ego of three men, but did we need to see all three at once in hologram form at the end? Maybe for his many fans the answer to that is yes .

All in all, a very lively, colourful futuristic production. It will truly please all Irish Dance fans, but if you’re not really into scissor kicks and very loud tap dancing which started once or twice even before the dancers were onstage (dancing in the wings? – I bet not!) maybe you won’t get past the 15 minutes or so after the show starts before you see the first sign of actual Irish Dancing.

P.S. The following morning I had an email from the company enclosing the details of their programme! So now I can say that on the night I saw the show the Lord of The dance was played by Morgan Comer, the Dark Lord by Tom Cunningham and the two violinists were Eimer Reilly and Valerie Gleeson.