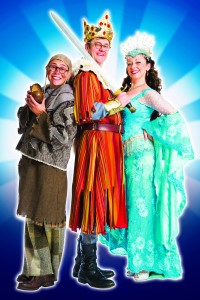 With a book by Eric Idle that is based (very loosely) on the legendary tale of King Arthur and the Knights who say ‘Ni’, this kind-of-new musical is lovingly ripped off from the classic comedy, Monty Python and the Holy Grail. No it’s not! Yes it is!
No, sorry, this is not the Python Argument Sketch this is Spamalot, recently voted the Funniest Musical in Britain.

Spamalot, with its bevy of beautiful show girls, killer rabbits, witch burnings (cancelled due to health and safety), plague carts, fish slapping Fins and flying cows, is unleashed (again) onto an unsuspecting Milton Keynes audience.
Eric Idle says of the show: ‘Spamalot is fun. The new production is funnier, it’s more like a Python show. There are new costumes and new sets and a new director (Christopher Luscombe), so it’s just got a whole different spirit to it.’ 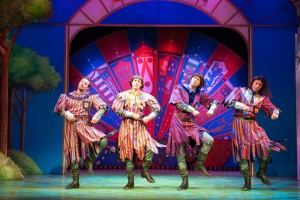 The show features fantastic tunes including, of course the Nation’s Favourite Comedy Song, Always Look On The Bright Side Of Life. (And yes, Spamalot audiences do get the opportunity to join in!)
And, as an example of magnificent Milton Keynes Theatre timing in the run-up to Father’s Day, the new production stars father and son duo Joe Pasquale, as King Arthur, and Joe Tracini, as King Arthur’s manservant, Patsy. What a bargain! Two Joes for the price of one! 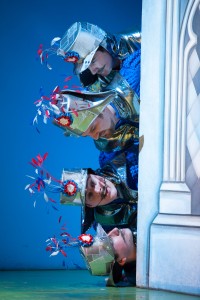 Sarah Earnshaw reprises her divine performance as The Lady of the Lake and God will be played by… you’ll have to book your tickets to find out.
Finally, be aware that during the show’s West End run, there were 21 onstage moustache incidents, three suspected cases of swine flu (French pigs!), three outbreaks of nits and 92 pairs of coconuts used. You have been warned.

During the interval on Monday evening, I heard a lady sum up Spamalot in one sentence:  “My sides are aching from laughing, yet it’s just a lot of utter nonsense!”

I’m sure there are still enough Monty Python fans around to pack the Milton Keynes theatre once more for this popular show even though I’m not convinced that this kind of humour isn’t just starting to date a little.

Its almost a series of sketches around the theme of King Arthur and his search for the Holy Grail and just like Monty Python, some work better than others. The very strong cast are lead by father & son team Joe Pasquale and Joe Tracini who work very well together along with Sarah Earnshaw as The Lady In The Lake who was called upon to sing in a variety of styles and proved she has a real talent for comedy. The Knights of the Round Table were coiffured to perfection (I’m convinced that Sir Robin (Will Hawksworth) was wearing a wig that was a Doris Day cast off!)  Tenor Richard Kent played Prince Herbert who was far more interested in running up a pair of curtains than fighting in the Crusades deserves special mention. In fact most of the cast played at least two parts, donning wigs and costumes at an alarming rate somewhere in the wings!

If you’ve never seen Spamalot before, do get along to see it – I don’t think we’ll see its like again!