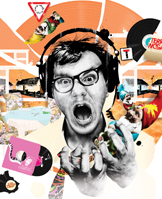 One of Willy Russell’s funniest and most poignant plays, One for the Road is directed by Royal & Derngate’s Laurie Sansom, as his last production before he leaves to head up the National Theatre of Scotland.

One For The Road is a hilariously observant ‘80s comedy by one of the country’s most acclaimed writers, responsible for such well-loved classics as Educating Rita and Shirley Valentine, as well as the hugely popular musical Blood Brothers.

The play finds Dennis, on the eve of his birthday, making a desperate attempt to ditch the trappings of his newly acquired middle class life. Imprisoned on Phase Two of a new housing estate and surrounded by Tupperware parties, Richard Clayderman fans and garden gnomes, Dennis yearns for his youth of road trips and music festivals.  Once neighbours Roger and Jane arrive to help celebrate his birthday it is not long before he reaches breaking point. As the day spirals out of control, it becomes clear that the mindless vandalism inflicted on the estate may not be down to local teenagers after all, and his wife and friends may not be quite what they seem. Dennis must attempt a break for freedom.

Con O’Neill, who takes role of Dennis, has been closely associated with Willy Russell’s work including his Olivier Award-winning performance as Mickey in Blood Brothers.  He also recently played record producer Joe Meek in both the West End play and film of Telstar.

Taking the role of his wife Pauline is Michelle Butterly, who plays Trudy in ITV’s Benidorm. On stage, Michelle has worked with the Royal Shakespeare Company and Shared Experience. Nicola Stephenson takes the role of Jane. Nicola’s stage credits include War Horse (New London Theatre), and she is also well-known as Margaret Clemence in Brookside. The part of Roger is taken by Matthew Wait, who will be recognised as Casualty’s Luke Warren.

One For The Road can be seen at Royal & Derngate from Friday 1 to Saturday 23 February.