Baroque Theatre Company launched in 2010 with a highly successful regional tour of Kindly Leave the Stage. Having received such positive feedback from audience members and reviewers alike, Baroque has decided to tour with this side-splitting favourite again, but on a much larger scale. 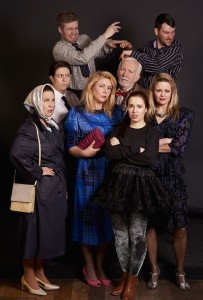 In a similar vein to Noises Off, this light, frothy and highly entertaining ‘play within a play’ shows the petty off-stage jealousies and entanglements between the actors within a repertory theatre company, not to mention their artistic differences!

Written by John Chapman, part of the writing team that brought us the classic British television series Are You Being Served?, Kindly Leave The Stage pokes light-hearted fun at the complete theatricality of stage folk. This deliciously silly comedy, in which nothing is quite what it seems, is just the thing to lift your spirits and provide you with an evening of farcical humour, slapstick and wordplay.

Directed by the award-winning Adam Morley, this production is a hilarious theatrical treat!

Kindly Leave The Stage at the Grove Theatre, Dunstable for just one night on 20th April