Our theatre reviewer Judi Herman tells us that she’s fallen in love with Shakespeare all over again with this production of Shakespeare in Love at Noel Coward Theatre London – and it’s there for the foreseeable future! Quite a Christmas or pre-Christmas treat!

Judi sent us this report after seeing the show:

‘I will have poetry in my life. And adventure. And love. Love above all.’   Still in the category of up and coming, young Will Shakespeare isn’t quite hitting his stride – at least not without a whole lot of input from the more worldly wise Christopher Marlowe, his go to mentor when he has writer’s block And then enter stage right the woman destined to change his life and his work,  Viola De Lesseps. This feisty young noblewoman may even be on course for changing working stage practice in London long before the Restoration of Charles II allowed women on stage … Of course they fall in love and of course Viola inspires Shakespeare to take up his quill again, eventually  to write Twelfth Night with its heroine named for his muse, but on this stage and in this story the blockbuster he produces is Romeo and Juliet

Based on the Oscar-winning screenplay by Marc Norman and Tom Stoppard, Shakespeare in Love has been adapted for the stage by Lee Hall (who did the same for Billy Elliott to such electrifying effect). The production is directed by Declan Donnellan, and designed by Nick Ormerod, founders of one of most influential and exciting theatre companies of the last few decades, Cheek by Jowl. Add Neil Austin’s often beautifully painterly lighting and the ravishing stage pictures that form so fluidly are like moving Holbeins.
Transfers from screen to stage are routine of late but the subject matter, competition between Elizabethan playhouses and a Shakespeare unable to produce new work, really lends itself to a theatre setting. Philip Henslowe (both magisterial and put upon Paul Chahidi), Elizabethan theatrical entrepreneur and impresario says early on “Comedy, love – and a bit with a dog. That’s what they want”. And that’s just what’s delivered on Ormerod’s set that cleverly represents the three- storey theatres of the time.
Tom Bateman is both charming and romantic as an overworked and lovelorn Shakespeare and there’s a real spark between him and Lucy Owen-Briggs that was perhaps missing between Joseph Fiennes and Gwyneth Paltrow in the film. And in a fine cast there are lovely performances from David Oakes as Christopher Marlowe and Anna Carteret, giving Judi Dench a run for her gold florins as a deliciously dry yet still commanding Good Queen Bess. 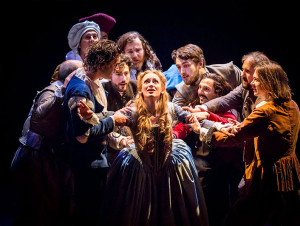 Lee Hall keeps most of the film dialogue and the plot involving the trials and tribulations of the entertainment industry in any age, and engineers it so it fits the physical demands of a theatre rather than film. And happily he even manages to keep the delightful cameo of the Thames waterman (Thomas Padden) boasting who he’s had in his boat, just like a latterday cabbie! What really distinguishes the play from the film, however, is Paddy Cunneen’s contemporary take on Elizabethan music, true in essence to music practices of the time. Cunneen’s music and Jane Gibson’s choreography come together to give a delightful feel of the times and to thrill the eyes and ears.

Music certainly is the food of love in this production and there can’t be many such feelgood shows on at the moment, which combine such high art, comedy, romantic love – and a dog (Spot the dog is played with by the very alert looking Barney!). The audience simply loved it the night I saw the show and clapped and cheered as the cast leapt and twirled in a thrilling Elizabethan dance at the curtain call.  This has got to be the ideal Christmas treat for all or anyone! 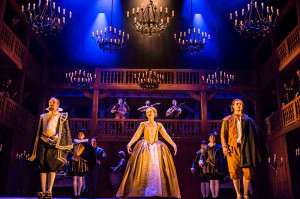 Shakespeare in Love is at Noel Coward Theatre London.