Following a sell-out run at The Watermill Theatre in Newbury Calamity Jane embarked on a UK tour and it’s at Milton Keynes Theatre until 29th Nov. 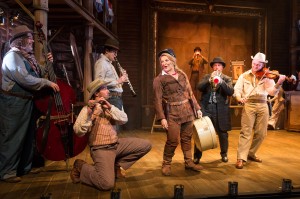 Calamity Jane can outrun and outshoot any man in Deadwood.  Hard, boastful and desperate to impress, she travels to Chicago to recruit a star, Adelaide Adams, for the Deadwood Stage.  But things don’t go too smoothly for Calamity, as everyone in town favours the new girl and she struggles to keep her jealousy and pride in check.  It takes her long-standing enemy Wild Bill Hickok to make her see sense, and realise her Secret Love…

Calamity Jane has an Oscar nominated score that includes The Black Hills of Dakota, The Deadwood Stage (Whip-Crack-Away), Just Blew in from the Windy City and the award-winning song Secret Love. 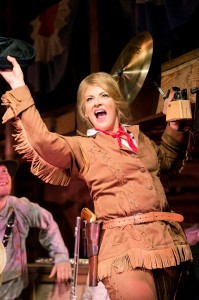 Jodie Prenger is probably best known for winning the role of Nancy in Cameron Mackintosh’s West End production of Oliver! through the BBC television series I’d Do Anything. During her run in the show at the Theatre Royal Drury Lane she received both critical and public acclaim for her portrayal of the role. Since then she has starred in the National Theatre’s hit production of One Man, Two Guvnors both in the West End and on tour and as Lady of the Lake in Spamalot. Jodie is also a regular presenter on BBC Radio 2.

Tom Lister most recently played Grimes and Eel in the world premiere of Water Babies at Leicester Curve. He is probably best known to TV audiences for his role as Carl King’in ITV’s Emmerdale, a part he played for nine years. His theatre credits also include Pan in Loves Mistress at the Globe Theatre and Ralph in Accrington Pals at the West Yorkshire Playhouse. 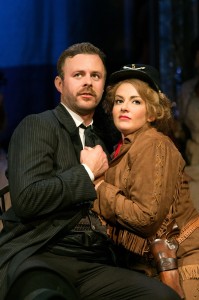 Calamity Jane is at The Milton Keynes Theatre until 29th November

Calamity Jane at the Milton Keynes Theatre until 29th November, started its life at The Watermill, Newbury.

I know it was a cold and wet Tuesday night in Milton Keynes, but I found myself wanting to apologise to the cast for the dull Tuesday night audience! Here’s a show that has transformed from a production designed for the Watermill into one perfectly suited to the much larger Milton Keynes Theatre. The cast did the acting, the singing and were the orchestra! There were several moments that deserved a huge round of applause if not a standing ovation, but no, this rather elderly audience sat on its hands – only lightening up at the very end. I’m sure they all enjoyed it – who wouldn’t – but they gave me the impression that some had not been to the theatre since the Doris Day version was new! This show has some great songs, plenty of comedy and, for a musical, a fairly strong story line! If you can get a ticket during this week you’ll be very lucky indeed! Judi Herman reviewed it for What’sOnStage. To read what she thought, please go to Judi Herman Interviews at the top of this page.