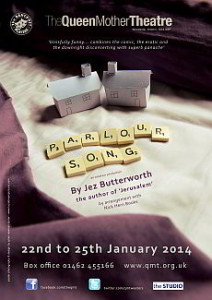 When marital bliss turns into domestic boredom, how do you react? In Parlour Song, Jez Butterworth answers this question with a jaw-dropping mixture of paranoid fantasy, surreal nightmare and dreams of escape. On a new suburban estate, Ned and his wife of 11 years Joy find that the cracks in their relationship are beginning to show. But when Ned confides in his neighbour Dale, a rattling chain of strange events – from the mysteriously missing objects that disappear from Ned’s home to the casual infidelity of Dale – are set in train.

The Bancroft Players describe Jez Butterworth’s work as Both an hilarious comedy on suburban life and an agonised meditation on the business of living. Butterworth’s dialogue is fiercely funny

Having seen the opening night I would agree entirely with this, but perhaps point out that “Fierce” is the word, some of the humour is explicit to say the least! Not for the under 16’s or the prudish!