The producers of the UK and Irish tour of the Tony, Olivier and Grammy Award-winning Best Musical Jersey Boys, are delighted to announce the full cast joining previously announced West End star Tim Driesen as Frankie Valli when it rocks in to Milton Keynes Theatre from Tue 3 – Sat 14 Feb. 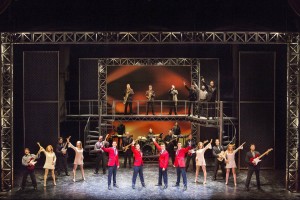 Tim Driesen is currently playing the role in the Dutch production of Jersey Boys, and previously played Frankie Valli for a short season at the Prince Edward Theatre in the West End.  He also played Joey Primo in Rock of Ages in the West End and created the role of Adrian Banks (the character based on Mark Owen) in Never Forget, both on tour and in the West End.

Jersey Boys has been seen by over 19 million people worldwide and is  the remarkable true story of Frankie Valli and the Four Seasons and their rise to stardom from the wrong side of the tracks. These four boys from New Jersey became one of the most successful bands in pop history and sold 175 million records worldwide – all before they turned 30.  The show is packed with their hits, including Beggin’, Sherry, Walk Like A Man, December, 1963 (Oh What a Night), Big Girls Don’t Cry, My Eyes Adored You, Let’s Hang On (To What We’ve Got), Bye Bye Baby, Can’t Take My Eyes Off You, Working My Way Back to You, Fallen Angel, Rag Doll and Who Loves You.

Jersey Boys is the winner of 55 major awards worldwide, including the Olivier Award for Best New Musical.  As well as still running on Broadway and in the West End, Jersey Boys can be seen in Las Vegas, across the United States on its US National Tour and in the Netherlands.

I went along to see this production at the Milton Keynes Theatre, here are my thoughts…..

Jersey Boys’ management allowed the cast the Tuesday opening night to settle in, then Wednesday was press night. It was a riot from the start. The audience just loved this very accurate and affectionate look back at the life and times of The Four Seasons. All the hits were in there, sounding as close to the originals as you could ever want. Congratulations to the musicians and singers for that. The story line is stronger than you might imagine, it shows the trials and tribulations of four lads whose rapid journey from the street to international stardom was not a simple thing to cope with. Even the sets become more spectacular as they progress towards stardom!

The various characters – one in debt, one homesick, one that would rather write songs than perform them – I won’t say too much more for fear of spoiling it, but all of these things go to make a truly fabulous night at the theatre, with dozens of memories for those of us of a certain age that were around at the time of the original Sherry!  The four lead performers ARE The Four Seasons – but the RSC they ain’t!