Just over a decade ago Bill Kenwright presented the year’s most sparkling and celebrated West End comedy hit at the Apollo Theatre, Shaftesbury Avenue – Noël Coward’s Fallen Angels. Extraordinarily, the Champagne-cork-popping hit had not been revived since, until last year. Following a successful autumn tour Fallen Angels is touring again and is at the Milton Keynes Theatre this week. 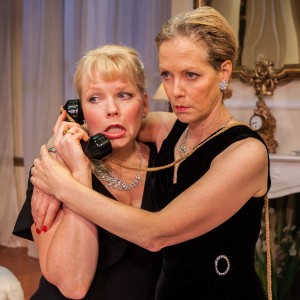 With their passionless husbands away playing golf, a mutual long-ago-lover announces his intention to pay Julia and Jane an impromptu visit. All in a fluster, there’s clearly only one thing to do: hit the bottle! Or rather, pop open the Champagne!

As each successive glass of liquid courage is imbibed, tongues start to loosen, hidden jealousies surface, the claws come out, and all attempts at demure behaviour go out the window. 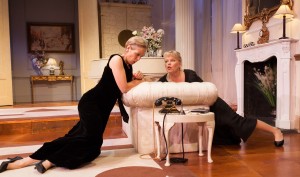 Jenny Seagrove is one of the UK’s most respected actresses. Her prolific theatre career has seen her play the lead in almost every West End playhouse, Jenny is also known to millions of TV viewers as barrister Jo Mills in the BAFTA award winning Judge John Deed, which she starred in opposite Martin Shaw.

Sara Crowe’s vast array of Film, TV and Theatre credits range from her role as the first bride in Four Weddings and a Funeral, to BBC’s Born and Bred. Sara was also the face of one of the UK’s best loved TV advertisement campaigns for Philadelphia.

If you would like to read the full review of Fallen Angels by Malcolm Singer , then please click on “Theatre Reviews”  at the top of this page.

Fallen Angels is at Milton Keynes Theatre until 22nd March