The film may have won four Oscars but writer David Seidler always saw The King’s Speech as a stage production.
He got his wish and now you can see this Chichester Festival Theatre & Birmingham Repertory Theatre production at the Milton Keynes and Oxford Playhouse Theatres, starring Jason Donovan as speech therapist Lionel Logue and Raymond Coulthard as King George Vl. 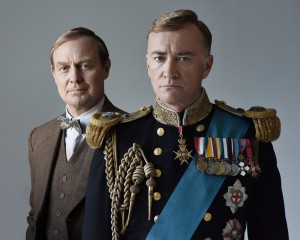 Logue was the maverick Australian speech therapist, who took on the task of helping George Vl overcome a crippling stammer so as to enable him to deliver the now iconic speech that, in 1939, on the eve of war, was broadcast throughout the world to inspire his people.

Of Lionel Logue, Jason Donovan says: “He was such an interesting and remarkable Australian who achieved so much in a very challenging situation. I think he is fascinating to play.’
Raymond Coulthard says: “Having been away from theatre for a couple of years I was hoping to find a project that would truly challenge me. I think it is safe to say I have found it!”

The King’s Speech is based on the true and heart-warming story of a man who never expected to be in the public eye let alone lead his country in time of war but who, with the help of a colourful Aussie ex-actor, overcame a debilitating affliction and guided this nation through its darkest hour.

I was at the first night in MK and these were my thoughts:

Well, may I be forgiven! With Priscilla Queen of the Desert, Chitty Chitty Bang Bang and Joseph (among many others) to his name I have to admit that I was of the opinion that Jason Donovan might be just a bit of a lightweight – HOW WRONG I WAS!  Both he (as speech therapist Lionel Logue) and the superb Raymond Coulthard (King George V1) along with a  surprisingly large and highly talented cast had the packed house gripped from the first minute. I was particularly pleased that Raymond Coultard wasn’t tempted to overdo the King’s stammer, but it was enough to show us his embarrassment and to point up the hurt he felt from his father and really quite evil brother who taunted him for most of his younger life, calling him B-B-B-Bertie etc. The supporting cast were all excellent, especially Claire Lams as Queen Elizabeth (still the Duchess of York at the beginning of the story) and Nicholas Blane who played Churchill without slipping into some sort of caricature of the man.

Theatrical sets that have to be struck and re-assembled at a different venue each week for touring companies must be notoriously difficult to design, but designer Tom Piper is to be congratulated for this ingenious one! A curved cyclorama of wooden panels more than adequately portraying rooms in Buckingham Palace, Logue’s surgery and even Westminster Cathedral with swift and unobtrusive furniture changes being done by the cast during moments of twilight.

All in all a grand night at the theatre that tugged at the heart strings one moment then had you laughing the next. Rarely do we see standing ovations for straight plays outside the West End, but that is exactly what happened on this Tuesday evening – quite deservedly so too!

and the following week at The Oxford Playhouse (11th – 16th May)