Please go to “Judi Herman Interviews” to hear more of this event.

Imagine Watford, probably the finest free festival in Herts Beds or Bucks is happening in Watford until the end of this month.

Have you noticed that Watford town centre has been transformed by giant dinosaurs, dancing beds, a whirling dervish and an ice cream van rom-com.

Imagine Watford is turning three, and this year’s festival promises to be bigger and more spectacular than ever before. Between the 20th and 30th of June Watford’s town centre will be hosting over 80 free performances from some of Europe’s most innovative and acclaimed performance artists. 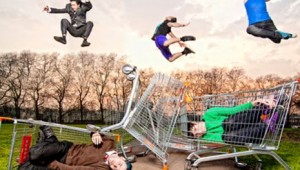 It continues until 30th June. The acts booked are as ever of an  international standard – if you were at last year’s festival you’ll know.

There’s still time to see the acts performing in and around Watford town centre. If you’d like to know more, just click on “Judi Herman Interviews”(above) and you’ll be able to hear Judi wandering to festival and talking to some of the performers.

Imagine Watford is on until 30th of June in and around the town centre. Just Imagine – over 80 performances from some of Europe’s most innovative and acclaimed performance artists ……and it’s all FREE!