Judi Herman has wandered the Watford pavements to bring us this…..

Imagine Watford is a terrific free open-air festival that takes place on the streets of the town and it’s rapidly becoming one of the most exciting happenings on the Home Counties summer scene. Imagine Watford is in its fourth year now and each year it’s attracted the best of thrilling open-air theatre from all over the world. It’s billed as “a festival of extraordinary open air moments” so here’s Judi Herman’s  selection of moments from the first week of this ten day festival which continues daily until Sunday 29 June. Find out more at www.imaginewatford.co.uk .

Imagine the chaos if a restaurant accidentally double-booked all its tables. That’s the ‘fiasco’ in the show’s clever punning name. But this restaurant takes it all in its stride, cleverly meeting and greeting customers and smoothly, soothingly seating them – and relocating them when necessary! And it’s all done without a word and to a marvellous mix of music in this fun dance show featuring a troupe of charming supple dancers of all ages as smart friendly waiting staff – and smart friendly customers! 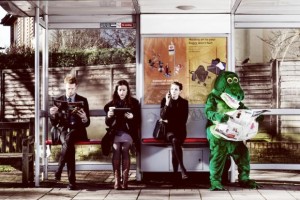 Light the Fuse Company’s Full Stop is another clever title for another delicious dance and movement show set in and around a bus shelter – and even on top of it – that has audience members of all ages charmed. Three dancers, two women and a man, create all sorts of weird and wonderful characters, simply by nipping round the back of the shelter to change and re-emerge ready for the next situation. In my favourite scenes, a couple get up close and personal to a soundtrack voicing some of the intriguing attempts of commuters to meet fellow travellers who have caught their fancy, through pleas to meet like ‘Rush Hour Crush’ in the Metro free paper; and a couple of competitive yummy mummies duel with their prams and the contents of the prams, including rattles, cuddly toys and feeding bottles, to the soundtrack of Ennio Morricone’s theme to the spaghetti western ‘The Good the Bad and the Ugly”  – a daft delight! 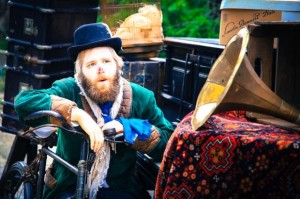 Flipping the Bird’s Music Hall show is a total delight – a clever conceit brilliantly executed by three extraordinary musical performers. It’s actually easy to believe that Varsickle Tilley, Glass Eye and Piccadilly Johnny have been travelling through time and space with their portable music hall, made up of all they could salvage from a great fire at the Hackney Empire that took place well before living memory… From their wonderfully tumbledown pop-up music hall they enchant their audiences with their stories of life on the road and on the halls and above all with their glorious music making on a variety of instruments including fiddle, clarinet and of course honkytonk piano. And they have a great time singing old music hall songs, some more familiar than others, occasionally reinventing them with new lyrics. The audience have a great time too, joining in the choruses as they learn them. I could have watched and listened for hours, not just 25 minutes! 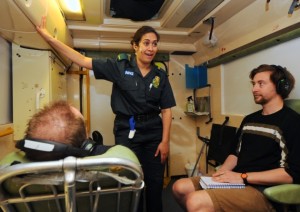 The Kindness of Strangers

Curious Directive has designed this extraordinary show for an audience of just five at each performance – for it takes place in the back of a moving ambulance, with the five of us strapped into seats (actually I got to lie on the stretcher!). It tells the story of rookie paramedic Lisa out on her first night shift with veteran Sylvia, on her very last shift on active service before joining management. We put on headphones to hear the extraordinary soundscape, not just of sirens and emergency calls as you would expect – for example a paramedic talking gently to a child locked in with her unconscious father who has suffered a heart attack – but also the exchanges between Lisa and Sylvia. For although Lisa is in the ambulance with us, she speaks only into a head microphone and Sylvia is prerecorded, though I for one have a clear mental picture of her by the end. The relationship between the two women veers from intimate and confiding to spiky and uncomfortable as we discover why each chose this profession and more about their hopes and fears. And through all this, the ambulance rattles on through different streets of Watford projected on to the back doors. The doors open, as the paramedics’ instructions for each emergency are shown on a TV size screen, to reveal vignettes set up especially for us in a side street, a park, a parking lot and even a cemetery. But we’re not allowed to remain mere spectators – one by one we are beckoned to deliver a sort of surreal triage that fits symbolically into each vignette – for example wrapping toys in paper like a gift for the child whose father has had a heart attack. A journey of extraordinary moments indeed with a heart stopping ending – it would be a shame to reveal more

There are further free performances of this show on Friday 27 & Saturday 28 June and although they are currently sold out, it’s worth calling the box office on 01923 225671 as there are returns – Judi  got one for a start!