IF: 2014 smashes all previous Festival audience engagement and box office records making it the biggest and most successful Festival to date and the new Creative Producer for the 2016 edition, is announced as Maria Bota 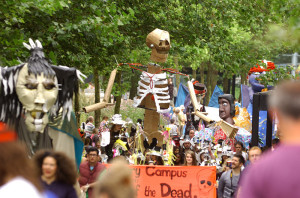 In this third edition of the Festival, a bigger programme of events over ‘10 amazing days’ hasengaged with more residents and visitors to the city than ever before. Events took place acrossCentral Milton Keynes and also extended out to South Willen Lake and the Cathedral of Trees in Newlands.

Many shows sold out including Ade Edmondson & The Bad Shepherds, the Puppini Sisters and comedian Josh Widdicombe – all in the ever-popular Spiegeltent – and Ilotopie’s on-water production Fous de Bassin (Water Fools). Some 25,000 people purchased for ticketed events, compared with 18,000 in 2012.

Over 140,000 people viewed these installations, took part in the programme or enjoyed free and family events at South Willen Lake Park, and an estimated 190,000 encountered pop-up and roving installations as they went about their business and daily lives in the city.

Dr Ann Limb, chair of IF: Milton Keynes International Festival, said:
“The impact of the Festival was much more widely felt in 2014. Placing a national and international spotlight on Milton Keynes, the Festival has engaged with more residents and touriststhan ever before which is great news for businesses, our local economy and Milton Keynes as a destination. People have enjoyed a much busier programme of free events and encountered a range of installations as they have gone about their daily lives – all created to encourage us to see a different side to Milton Keynes.”

Monica Ferguson, Festival Director and Chief Executive of The Stables, said:
“The Festival presented a bigger and more diverse programme of large-scale events and intimate experiences than before, to encourage people to explore, enjoy and debate. Projects such as the Lucie Lom figures generated a real buzz around the city as people sought to find an explanation for the surprise appearance of these enigmatic characters. ‘Under The Vaulted Sky’ – created especially for Milton Keynes’ beautiful Cathedral of Trees and featuring a cast of 100 local people – had had a profound and moving effect on people whilst the many free events provided great family days out.”

Looking ahead, the Festival welcomes a new Creative Producer, Maria Bota, to the team for the 2016 Festival, who takes over from Bill Gee who has been with the Festival since 2010.

Maria previously held the post of Festival Director developing the vision and programme of the Grand Départ Cultural Festival in Yorkshire, the 100-day arts Festival alongside the 2014 Tour de France. Prior to this, she was Festival Director of the 16-day Ageas Salisbury International Arts Festival. Before moving to Salisbury, Maria worked as General Manager of the Huddersfield Contemporary Music Festival, Marketing Director then Deputy CEO at Manchester’s Bridgewater Hall. She won a fellowship on the Clore Leadership Programme and has undertaken secondments with producers of major festivals and events, including Artangel, Artichoke (working on theSultan’s Elephant) and the culture10 team in NewcastleGateshead. Further back, Maria’s first role in the arts was with the London Symphony Orchestra after studying Music at Goldsmiths’ College, University of London.

The next IF: Milton Keynes International Festival will take place in July 2016.

The Festival is delivered every two years with funding from Arts Council England, Milton Keynes Council and support from local and national trusts, foundations, businesses, sponsors and individuals.