Comedian and Not Going Out star Lee Mack comes to Royal & Derngate NEXT year! 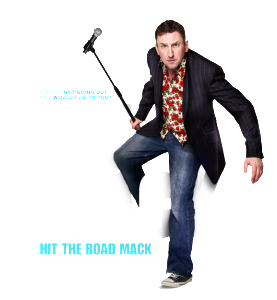 One of Britain’s most recognisable and celebrated comics and star of sitcom Not Going Out, Lee Mack will take to the Derngate stage next year, with his new show Hit The Road Mack, where audiences can expect his trademark brand of high energy banter, well-crafted gags and sharp one liners.

Lee’s BBC1 sitcom Not Going Out has won both the Break-Through Award – Behind the Screen at the RTS Awards, and the Gold Rose D’Or award for Best Sitcom. Lee is a team captain on the BBC1 panel show Would I Lie To You?, appearing alongside David Mitchell and Rob Brydon, and has won a BAFTA for his contribution to The Sketch Show (ITV1). He is also frequently seen on Have I Got News for You, Never Mind the Buzzcocks, Live at The Apollo, QI and The Royal Variety Performance.

This hotly anticipated live tour is Lee’s first in four years. His 2010 Going Out stand up tour was twice extended and his previous sold out solo tour was nominated for Best Live Stand Up Tour at the 2006 British Comedy Awards.

Tickets for his performance on Tuesday 18 November 2014 go on sale at Royal & Derngate from 26 July.