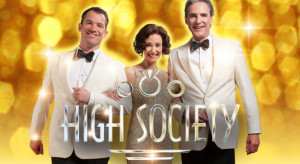 Wealthy socialite Tracy Lord (Sophie Bould, Royal & Derngate’s The Go-Between) is in the midst of planning a lavish summer wedding when her ex-husband, jazz musician Dexter Haven arrives to disrupt the proceedings in an attempt to try and win her back. In a further twist, charming reporter Mike Connor, sent to cover the wedding, falls instantly for Tracy, and she for him. As the nuptials draw closer, Tracy must choose between her three very different suitors.

The role of Haven, (Bing Crosby in the film) is played by Michael Praed, star of Robin of Sherwood and The Secret Adventures of Jules Verne. Daniel Boys, of Any Dream Will Do fame, plays Mike Connor, and founder member of Fascinating Aïda, Marilyn Cutts is Tracy’s mother Margaret Lord.

Royal & Derngate are staging a themed evening of vintage Hollywood glamour for the show’s first night in Northampton on Tuesday 9 April.  Audiences are encouraged to look their most de-lovely for the red carpet, and a special cocktail has been devised for the show’s run by the theatre’s café, Eat & Drink.

Cole Porter’s High Society at the Royal & Derngate from Tuesday 9 to Saturday 13 April.