The Harpenden Pantomime (Jack & The Beanstalk this year) at The Public Hall from 13-22nd December is truly part of community life in the town – and has been since producer Chris Law brought Act One Pantomimes’ productions to the area seven years ago.

This weekend, the principal cast took part in the annual Christmas Lights Switch on. This is a big day in Harpenden’s Calendar, with a big Farmers Market all afternoon and for this occasion it was supplemented by Charity stalls and Young Enterprise stalls. Santa, busy as he is, still spent the day in Harpenden in his Grotto.

During the afternoon there was the annual procession lead this year by a fine white carriage drawn by two beautiful black horses. 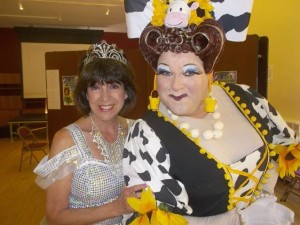 In the carriage and thrilling both the children and the adults was Jack & The Beanstalk’s Good Fairy played by Sally James of TV’s TISWAS fame. Sally was accompanied by the Breakfast team from Heart Radio and the Mayor of Harpenden Councillor Rosemary Farmer. 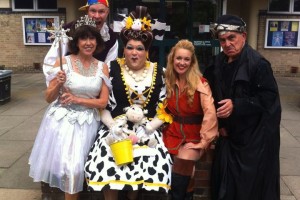 Following in open-topped cars were more of the pantomime’s cast, Jack Trott (Hayley Cutts of CBBC’s Newsround), the Princess (local singing sensation Sophie Massie), very popular Dame Richard Aucott returning to Harpenden this year as Dame Trott after being such a hit in last year’s panto, Simple Simon (Chris Law’s very popular character) and the villain of the piece Fleshcreep (Ernie Almond BBC 3 Counties Radio & Smartie Artie) Adding to the fun was a huge decorated float packed with local brownies and of course Santa in his sleigh.

The whole town was packed with a very high spirited crown who enjoyed the panto cast wandering through in costume and chatting on their way back to their rehearsals.

At 5pm came the big Switch-On. A sea of faces in front of the stage in Church Green watched as the panto characters joined the Heart Radio presenters and Sally James helped Jacob, the young winner of the Mayor’s Christmas Card Design competition, to pull the HUGE lever and to the delight of all present Harpenden’s 2013 Christmas Lights sparkled for the first time!

All in all a great day, with most of the shops open into the evening and every other available space taken by many huge and very exciting fairground rides.

If you would like to see Jack & The Beanstalk in Harpenden this year, you can book them from the box office: 01582 767525 or online by clicking this link: www.harpendenpublichalls.co.uk 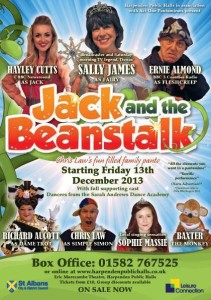