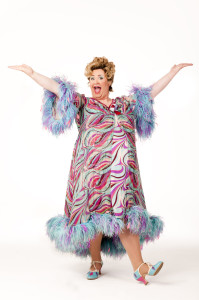 Mark Benton is one of the country’s most loved and recognisable television actors, and Lucy Benjamin’s earliest credits include the musicals Annie, Barnardo and Worzel Gummidge in the West End. She made her television debut in Doctor Who before starring as Lisa Fowler in the BBC’s EastEnders.

Liverpool born and bred, Marcus Collins rose to fame, and won the hearts of the nation, on ITV1’s 2011 season of The X Factor.  Mentored by music legend Gary Barlow and hugely popular throughout the series. Since then he has toured the UK as part of The X Factor Live tour and has released the Top 10 album, Marcus Collins.  His leading role in Hairspray marks his musical theatre debut.

It’s 1962, the 50s are out and change is in the air.  Baltimore’s Tracy Turnblad, a big girl with big hair and an even bigger heart, has only one passion – dancing.  She wins a spot on the local TV dance programme, The Corny Collins Show and, overnight, is transformed from outsider to irrepressible teen celebrity.  But can a trendsetting hair-hopper like Tracy get her massively shy Mom out of the apartment, beat evil Amber to be crowned Miss Hairspray, integrate Corny’s show for good AND win the heart of local heartthrob Link Larkin, all without denting her super high ‘do’?  If anyone can, Tracy can!

At the 2008 Olivier Awards, Hairspray won Best Musical, as well as a further three awards from a record breaking eleven nominations.  The show has also won Best Musical at the Evening Standard Awards, the Whatsonstage.com Theatregoers Choice Awards, the Critics’ Circle Awards and the Variety Club Showbiz Awards.