In The Mood with The Glenn Miller Orchestra at Royal & Derngate

The Glenn Miller Orchestra returns to Royal & Derngate on Sunday 3 November, with strings, for an early evening show of swinging wartime nostalgia.

The Orchestra’s loyal Northampton following can expect all the big band classics including In The Mood, Tuxedo Junction, and Chattanooga Choo Choo. And imparting an extra mellowness to some timeless classics, the Glenn Miller Strings will swell the Orchestra’s ranks for a very special show. Although Miller is traditionally associated with a big band line-up including a large brass section, three rhythm players, and a lot of noise, he did have had a mellow side too. Band Leader Ray McVay has obtained the original, rarely-heard string parts for Moonlight Serenade and several other favourites directly from the Glenn Miller Estate in New York.

Joining the Glenn Miller Orchestra and Strings will be the jumping jazz band, The Uptown Hall Gang, and the fabulous harmonies of the Moonlight Serenaders. Almost 70 years after Miller’s tragic disappearance in 1944, Ray McVay and his Orchestra continue to keep the smooth, syncopated spirit of the Army Air Force Band very much alive. 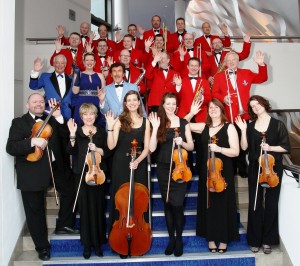