(Judi Herman has been speaking to David Nixon, Artistic Director of Northern Ballet. You can read the interview at the foot of this post.) 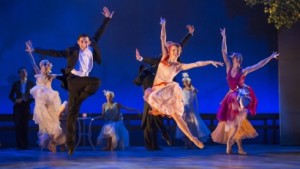 Discover the heady, indulgent days of New York’s Long Island during the 1920s as F Scott Fitzgerald’s classic novel is brought to life.

With sweeping, filmic music from Sir Richard Rodney Bennett CBE (Four  Weddings and a Funeral, Murder on the Orient Express) played live by Northern Ballet Sinfonia, ‘Expect a fabulously uplifting evening of  ballet with dancers that make you want to Charleston and Foxtrot around  the fridge when you get home!’ (Woman & Home) 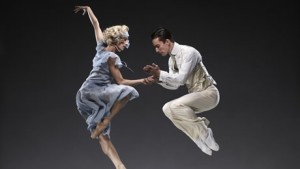 Specially for TheatreBlog, Judi Herman caught up with David Nixon, Artistic Director of Northern Ballet, as the company visits Milton Keynes with two brand new ballets, The Great Gatsby, the latest in the company’s great series of story ballets, and for smaller dance lovers, The Ugly Duckling!

“I think it’s in the air somehow” says David Nixon, and since I’ve just received an email heralding the arrival in cinemas of Baz Luhrman’s film starring Leonard di Caprio, he has a point. But Nixon’s love of F. Scott Fitzgerald’s story of the mysterious millionaire with a secret past and a penchant for lavish parties and beautiful women, goes back to his schooldays. “It was a favourite novel of mine in school, I studied it the year the Robert Redford Mia Farrow film came out. It made quite an impression on me”.

So was he attracted to the jazz age 1920s setting, with the chance to design glorious sets and stunning costumes? “People do love the costumes and the look of the show is very beautiful, reminiscent of the paintings of Edward Hopper. The 1920s is just a great looking period” he agrees. “But what drew me more was having seven main characters, with different personalities and different real adult relationships. Sometimes I find ballets doing artificial relationships, so when you find stories with real people doing real emotions, that’s quite exciting!”

I want to know whether we’ll see the Charleston. “You will indeed” he promises “and the tango too!” Nixon is using music by the late Richard Rodney Bennett, who died in 2012, a prolific composer whose work includes the music for Four Weddings and a Funeral. “It’s a compilation of his music spanning most of his career as a composer – it even includes a song that he sings himself at the end of the evening”. It’s played live by Northern Ballet Sinfonia.

We talk some more about the happy timing of this production with the blockbuster film. “The design world has embraced it as well” he says happily, “so everywhere you go you’re getting this feel and look of the 1920s and we don’t have the kind of marketing budgets that movies have but everywhere you’re hearing “Great Gatsby” so people just hear those words. There’s a thing I heard, you have to be hit seven times with something before you react so the movie I think is definitely helping us!”

Looking at the credits I notice that Nixon has done the choreography, direction, scenario and costume design so I ask if he’s done all that before and if he’s trained as a costume designer too. ”I’ve designed the costumes to pretty much everything I’ve done. I partner with the people who are used to making the costumes because I find they’re the important people. I picture what my dancers look like, I imagine how the fabric moves in my choreography. I get inspired by doing the costumes.”

The Ugly Duckling is selling out to young dance lovers at only £5 a ticket and I wonder where this lovely idea came from. “It’s a long cherished ambition realised at last. It actually came out of our Learning Department” he explains. “We decided to do ballets for younger people because we all agreed we try and encourage people to bring their kids to see full-length shows but we have to face it, they are too long. So to actually bring kids to a show that’s the right length and completely focused on them I think is just incredible and we’ve had a wonderful reaction to it”.

In the ballet the Ugly Duckling is a girl. It seems like a lovely idea, especially as swans figure so much in ballet stories. “Of course she does turn into a swan, very much your standard ballerina-looking swan”, he smiles. “It’s an in house project and that’s great for all the departments because they get to use their own talents and imagination but also I’m able to use it as a tool for developing young choreographers. Two of our dancers actually created it, Dreda Blow and Sebastian Loe”. Sebastian says the story has a great message – don’t be afraid to be yourself. And Dreda says she saw her first ballet when she was just two! The show is selling out wherever it goes. It has a whole woodland of animals so I guess it must be great for the dancers! “Yes, they had a lot of fun making it. There’s cats and frogs and ducks and a wolf!”

I return to The Great Gatsby. How are audiences reacting to the show? “Audiences have loved it. In most places we’ve gone over our sales target. I love going on our own site and reading what the audience says because they really seem to be enjoying it and finding it beautiful and dramatic and they love the Charleston it makes them feel like dancing. I wanted people to feel they wanted to be in Myrtle’s apartment and be at the party, dancing the Charleston at Gatsby’s”

Finally we talk about Milton Keynes Theatre. “We love this theatre!” he says enthusiastically. “It’s one of the best in the country and we really would like to grow our audiences here as much as possible”. Happily he’s sowing those seeds this week with The Ugly Duckling!

The Great Gatsby and The Ugly Duckling are at Milton Keynes Theatre to 20 April.

For details of other tour venues, including Cardiff, Norwich and Sadler’s Wells in London, visit www.northernballet.com.