Four Farces, a delicious evening of farce from the Victorian stage can be enjoyed at The Radlett Centre on Wednesday 22nd May at 8pm 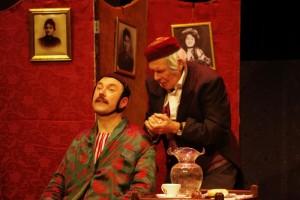 There’s more than a hint of Monty Python and The Goons in these four plays – Box and Cox, Wanted, A Young Lady, An Unwarrantable Intrusion and Duel in the Dark. With duelling pistols and thwarted lovers, double-crossing and cross-dressing and romance and intoxication, these colourful comic capers promise a sublime evening of mayhem and merriment.

The show stars celebrated farceur Richard Latham who in a long comic career has worked with Sir Brian Rix in his Whitehall Farces, as well as appearing with the great Alastair Sim in The Clandestine Marriage (directed by Sir Ian McKellen). The aim of European Arts Company is to present ‘quirky classics’ in an imaginative and entertaining way, with a particular emphasis on comedy. Says Director Jonathan Kemp (himself currently touring in the stage version of ‘Yes, Prime Minister’):  “These four unjustly neglected plays will give the audience a great insight into what made the Victorians’ ribs tickle, as well as providing them with plenty of 21st century laughs and entertainment!’

Why go and see one ordinary play when you can see four hilarious ones in under two hours?

FOUR FARCES at The Radlett Centre on Wednesday 22ND MAY