John Cleese (no, not appearing) makes his stage writing debut with a hilarious new adaptation of this classic comedy – a delicious blend of French Farce and Fawlty Towers. 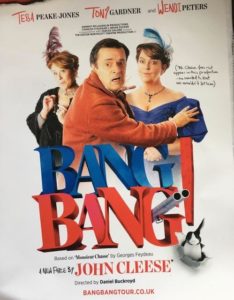 When Leontine, (Tessa Peake-Jones) a respectable society lady, discovers that she’s been hoodwinked by her husband, Duchotel, (Tony Gardner) who’s always pretending to go hunting but really chasing after other ‘prey’, she vows to take revenge on the philanderer! But while Duchotel’s away, his lifelong friend Dr Moricet (Richard Earl) comes calling – and he’s on the hunt too.

Will Leontine get caught in his sights, or instead set a trap of her own?

Secrets unravel as the devilish Duchotel finds himself snared in a door-slamming, trouser-dropping, balcony-climbing night of chaos set amidst the stylish apartments of Paris. The apartments are run by Madam Latour (Wendi Peters)

Bang Bang! is at The New Theatre, Peterborough until 29th February

If you’re a fan of farce this is this is for you! John Cleese has adapted a story by Georges Feydeau and proved yet again that he is a master of outrageous comedy. He wisely decided to leave the play set in Paris which seems to make the plot all the more believable. Due to the combined skills of the author, the director and the very strong cast, we are taken in completely believing every ridiculous antic our “devoted” couples get up to!

Every now and then the “third wall” is broken for a character to make a comment as to how things are going. You might be forgiven for thinking this would break the mood, but it in fact adds to the general chaos happening in the lives of most of the cast!

The play, as you might expect, has many a nod towards Fawlty Towers, but then we might be disappointed if it didn’t! The hilarious script is performed absolutely straight by our talented cast, lead by Tessa Peake-Jones, Tony Gardner and Wendi Peters. Originally a three act this has been changed to a two act play by giving Madam Latour a song to sing (she’s fallen from grace due to an unfortunate incident with a lion tamer) during the set change. As you might (or might not) expect, the stage hands in their brown coats complete the set change in time and step with Madam Latour’s singing.

Get to see this if you can, its a hoot! You might see a man without his trousers…..but you’ve seen a lot worse!

Bang Bang! is at The New Theatre, Peterborough until 29th February