Nobody does Elvis Presley better than Chris Connor. His voice, his moves, his style, even his looks – Chris has made the great man his own. As one journalist put it ‘You would swear you were watching the original.’ 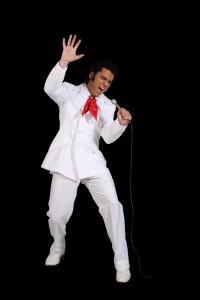 The show provides the perfect glimpse of ELVIS at the height of his vocal powers, an entertaining genius who had the world at his feet.

Possibly two of the most famous and hard Rockin’ live performances ELVIS ever made. Two legendary shows captured for posterity on film. Elvis’ first live performance in 10 years, the ‘68 Comeback Special and the first ever, satellite broadcast of a pop concert in 1973 ‘Aloha from Hawaii’.

ELVIS the Ultimate Performance is powered by a full orchestra emulating the famous ELVIS sound.
These two live performances of ELVIS were magical, even causing ELVIS to say “They were the most exciting engagement I have ever done in my life”.
Chris Connor’s take on these memorable performances is a  complete delight. The show highlights all the different guises ELVIS had at his disposal and features some of his best loved hits such as Burning Love, Blue Suede Shoes and Suspicious Minds some of his most famous ballads like Love Me Tender, Can’t Help Falling in Love and Are you Lonesome Tonight and some of his most exciting but lesser known songs like Trouble/Guitar Man and Memories and not to leave out the most iconic ELVIS songs If I Can Dream and American Trilogy.
If you like ELVIS you will LOVE this show!

Elvis – The Ultimate Performance is at The Watford Colosseum on Wednesday 13th February.