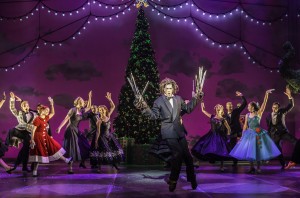 New Adventures’ magical production of Edward Scissorhands has carved a place in the hearts of thousands across the world since its premiere in 2005. After sell out performances in Europe, America, Asia and Australia this spectacular modern fairy tale returns to the UK in its first major revival.

The title role will be played by popular New Adventures star, Dominic North, who will be returning to the role than won him a National Dance Award nomination as Best Male Dancer in 2009. Making his debut as Edward this season will be New Adventures rising star, Liam Mower. Liam was recently seen in Billy Elliot Live, when he returned to the show that made his name to play “Older Billy”. Liam recently played The Prince in Swan Lake and Count Lilac in Sleeping Beauty.

Playing Edward’s sweetheart, Kim Boggs, will be Ashley Shaw and Katy Lowenhoff. Ashley has played the Principal roles of Aurora in Sleeping Beauty, Sugar in Nutcracker! and the title role in Cinderella (all for New Adventures). Katy has become a popular New Adventures performer through her performances as Clara in Nutcracker! and her created role as “Hibernia” in Sleeping Beauty.

Returning to the production in her original role as Peg Boggs will be New Adventures Associate Artistic Director, Etta Murfitt. She will be joined by audience favourite, Madelaine Brennan, another original cast member who will also play Peg Boggs, Joyce Monroe and her created role, Tiffany Covitt. Saranne Curtin makes a very welcome return to the Company to play the role of Joyce Monroe.

In other featured roles, Kim’s “All-American” Jock Boyfriend, Jim Upton, will be played by Tom Clark, Dominic Lamb and Leon Moran. Bill Boggs, Kim’s Father, will be played by Tim Hodges And JACK JONES and Joyce’s downtrodden husband, George Monroe will be performed by Danny Collins and Gavin Persand.

Based on the classic Tim Burton film and featuring the beautiful and unforgettable music by Danny Elfman and Terry Davies, this touching love story tells the bittersweet story of a boy created by a lonely inventor who dies leaving him alone and unfinished. Left with only scissors for hands, Edward must find his place in a strange suburban world where the well meaning community struggle to see past his appearance to the innocence and gentleness within. 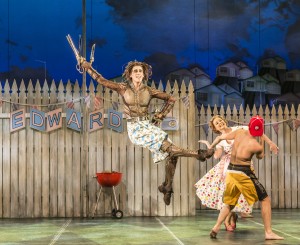 I was most privileged to be invited to the Press Night of Edward Scissorhands at Milton Keynes Theatre. I’ve made my living as an entertainer for 45 years, I like to think I’m a reasonable actor – but dancer I ain’t! So I don’t feel qualified to comment on the technical aspect of the performance although I’m convinced it was as near to perfect as it’s possible to get on a tour. I can say can say without doubt it was hugely entertaining. The masterstroke of Matthew Bourne was brushed across every scene. The main Edwards Scissorhands’ plot being surrounded with a look at the life of all the other characters on that stage! From the geeky husband that couldn’t even control his lawnmower let alone his marriage, his wife so frustrated that she grabbed almost any man that crossed her path, to the stiff and starchy, nose-in-the-air church leaders who seemed to be at the front when any unpleasantness was taking place. As usual Matthew Bourne brings all of this to life with humour (balletic topiary and a giant poodle with hair styled by those very scissorhands) and pathos – I never thought a fictional character with one foot long blades for fingers would ever give me a lump in the throat!

The sets are stupendous and the final scene just beautiful! Go and see this production for your own sake!

Box Office: 0844 871 7652 or online:nvinced it was as near to perfect as it’s possible to get on a tour. I can say www.atgtickets.com/miltonkeynes