Featuring the classic songs ‘And I Am Telling You I’m Not Going’, ‘Listen’ and ‘One Night Only’, this sensational production of Dreamgirls had its critically acclaimed West End première in December 2016 at London’s Savoy Theatre, 35 years on from opening on Broadway. 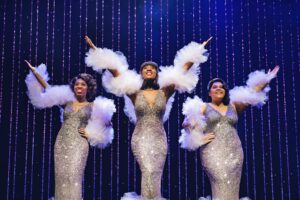 Meet the Dreams – Effie, Lorrell and Deena – three talented young singers in the turbulent 1960s, a revolutionary time in American music history. Join the three friends as they embark upon a musical rollercoaster ride through a world of fame, fortune and the ruthless realities of show business, testing their friendships to the very limit. 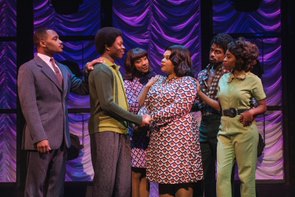 Dreamgirls is at Milton Keynes Theatre until Sat 5 Feb

I went along on Press Night and these were my thoughts:

Dreamgirls arrived in all its glory at The Milton Keynes Theatre – along with a fine 10 piece orchestra under the direction of Simona Budd.

This true-to-life story of a three girl harmony group in America in the 70’s had Sharlene Hector in the lead on that night as lead singer Effie White. She has a voice you could mistake for that of Jennifer Hudson and got a well deserved standing ovation for her rendition of “I’m Telling You I’m Not Going” – the song that most people talk about and one which quite frankly the first act truly needed.

The Other two girls, Deena Jones (Natalie Kassanga) the girl that not only stole Effie’s lead role in the group but also her man and the youngest member Lorrell (Paige Peddic) were both well cast I thought but needed a little more pezaz. I thought after they became successful the “Diana Ross” look of a top, very wealthy star might have been helped by a different costume and more bling.

This show is shortened slightly – we don’t really get the downfall of Jimmy Early (Played with loads of energy by Brandon Lee Sears – what a performer he is!) or the hard times that Effie went through as a single, out of work parent.

Christopher Gopaul was Curtis Taylor Jnr on the night we went. He’s the nasty manager of the group and I felt his performance could’ve been stronger and nastier – I also got the impression he was having to play well above his true age which is always difficult especially if romance is involved.

Dreamgirls is a strong story of showbiz’s good times and the tough ones. Lots of good music into the bargain – you’ll have a good night out, if you can get a ticket!

Dreamgirls is at Milton Keynes Theatre until Sat 5 Feb