They say if you arrive at the theatre in the wrong mood you will not enjoy the show no matter what! So I have to be honest and say that yes, I was one of the doubters. How could a dance troupe – even Diversity – be the stars of a pantomime? Pantomime is traditional fayre, with traditional routines and gags – not up Ashley Banjo‘s street at all! 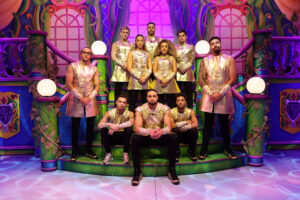 I couldn’t have been more wrong! Not just Ashley but all the boys & girls joined in many of the comedy routines with gusto. “If I Were Not In Pantomime” being one that stood out that both I and Simon Trott (Pete Firmin) will remember for a very long time. Me because I laughed a lot and Simon because he’s having to spend the entire Christmas season being smacked in the face with a frying pan several times nightly! What a way to earn a living! 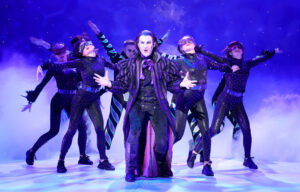 Daniel Boys was a particularly slimy Fleshcreep, the giant’s henchman and he kicked off the show with his own evil dancers perfectly. In fact Fleshcreep kept up the level of boos he recieved right to the end. Good baddy stuff!

The sets and costumes were proper panto glam and glitter. The giant actually appears and isn’t just projected onto the set, we see Jack cheating by flying a working helecopter to the top of the beanstalk, flying right out over the stalls in the process!  The script was sharp and witty, the songs fitted in perfectly and Jack and all his (Diversity) brothers’ routines are energetic, hugely skilfull and with the humour we’ve come to expect from this gang. 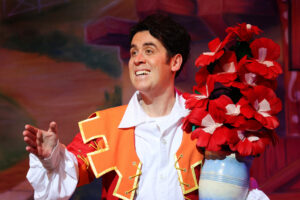 Pete Firmin as Simon was most likeable. He won the audience over within seconds and they loved him and his tricks. Such a good pro that I got the feeling that if anything untoward happened he would just carry on entertaining us until it was fixed – no problem! 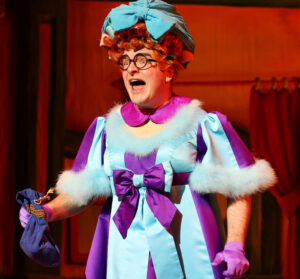 I have a thing about Pantomime dames, I’m convinced that they should be the wrong side of forty (age & waist) and not be a female impersonator. Even the late great Danny La Rue  made sure he had Alan Hayes with him to fly the flag of proper panto dames. The dame in Jack & The Beanstalk at Milton Keynes is perfect! Dame Trott was played brilliantly by Jack Land Noble, a true expert! From a family steeped in show business, Jack knows exactly what he’s doing and the audience realise this very quickly and relax knowing all is well. His costumes are of course ridiculous but at the same time just right. 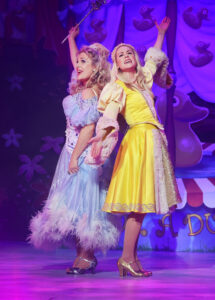 The good fairy character, in this production Mother Nature (Gina Murray) was much in evidence and unusually for this character had several songs which were all a delight. Similarly the beautiful Princess Jill (Laura Evans) with yet more dancers as her entourage made the perfect partner for Jack – even though he was head shoulders and chest above her, or so it seemed!

The songs, special effects, dance routines and standard Panto gags all just helped the story along and we – thats us led by our hero Jack won the day in the end and the Giant came crashing down!

Make no bones about it, this is the finest, most spectacular pantomime even Milton Keynes Theatre has had for a while as the rapturous, standing ovation proved! I’ve seen quite a few so far this year and without a doubt this one stands a mile out in front of the others!