If you missed The Beatles in 1963, now’s your chance to experience the hype! The Upbeat Beatles are playing at the Grove Theatre in Dunstable on Saturday 25th May. 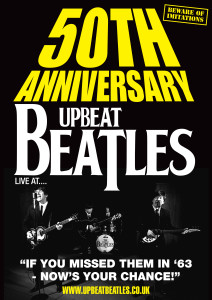 Great powerhouse vocals and close harmonies, pumped out with a driving backbeat make this a show that will have you tapping your feet from the opening bars. The Upbeat Beatles tell the story of The Beatles using their songs, from the depths of Liverpool’s Cavern Club to the roof top of Savile Row.

Formed in 1997, The Upbeat Beatles have performed at leading venues around the UK and overseas. They are now recognised as one of the premier Beatles tribute bands and, now they need your help!

Is there anyone out there in the area who performed with The Beatles in the early years? Are you still together as a band? Could you get back together? Do you want the chance to relive those days?

The Upbeat Beatles are offering you the chance to perform a couple of non-Beatles songs before their set, at the Grove Theatre.

Even if you just want the chance to spend five minutes reliving that night from the stage, get in touch. Contact the Grove Theatre by emailing marketing.grove2@leisureconnection.co.uk.