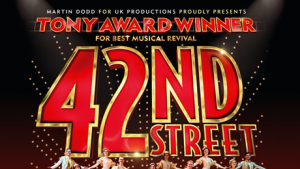 Winner of the 1980 Tony Award for Best New Musical and the 2001 Tony Award for Best Revival of a Musical: 42nd Street — the timeless, inspiring tale of small town Peggy Sawyer’s rise from chorus line to Broadway star. So many songs you’ll know, including Lullaby of Broadway, We’re in the Money, Shuffle Off to Buffalo, Keep Young and Beautiful, I Only Have Eyes For You and the spectacular title number, danced down a flight of steps that lights up as brightly as the faces of the cast. Musical Comedy at its very best!

‘Come and meet those dancing feet!’

42nd Street is at The Waterside Theatre in Aylesbury until Saturday 24th November.