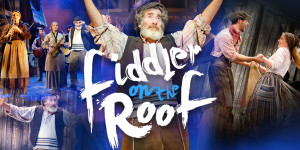 From the award-winning producers of The King and I and High Society comes a new production of one of the world’s favourite musicals, Fiddler on the Roof directed and choreographed by Craig Revel Horwood, the nation’s favourite Strictly Come Dancing judge. The show stars the celebrated and acclaimed actor, director and writer, Paul Michael Glaser (Starsky in the iconic 70s TV series Starsky & Hutch) in the lead role of Tevye.

Tevye, the local milkman in his village of Anatevka, has always stuck by his traditions but suddenly his headstrong daughters decide that they want to marry for love rather than accept whatever Yente the Matchmaker comes up with. Tevye loves his daughters but has to convince his wife, and the villagers, that their decisions are actually falling in with tradition – not an easy thing to do but if anyone can do it, the wily Tevye can! Filled to the brim with classic songs like If I Were a Rich Man, Matchmaker Matchmaker, Sunrise Sunset and To Life, when you join Tevye, his family and friends, you will understand why Fiddler On The Roof was the longest running production on Broadway for over 13 years!