Theatre Royal Bath Productions presents a brand new version of Noel Coward’s Present Laughter with Samuel West and Phyllis Logan at Milton Keynes Theatre from 11th–16th July as part of a UK tour, prior to a West End transfer. 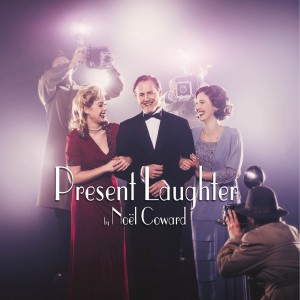 Actor, charmer and diva, Garry Essendine is determined to disregard his advancing years and receding hairline by revelling in endless tantrums and casual affairs. But just as he is about to depart for Africa, he finds himself besieged by a bevvy of would-be seductresses, not to mention his long-suffering secretary, his estranged wife, and an obsessed and rather strange young playwright. As he attempts to disentangle himself from their clutches and demands, the humour escalates, accompanied by delicious dialogue and sparkling repartee.

Often thought of as semi-autobiographical, Noël Coward’s Present Laughter is undoubtedly one of his funniest plays as he looks at life behind the theatrical curtain and reveals a world of glittering wits, dashing dressing gowns and ostentatious personalities. 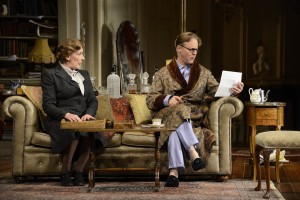 Samuel West, whose acclaimed credits include Mr Selfridge and many leading classical roles for the RSC, plays Garry Essendine.  He has portrayed both Richard II and Hamlet on stage with the Royal Shakespeare Company.

Multi award-winning Phyllis Logan plays Monica, his acerbic secretary. Best known as the housekeeper Mrs Hughes in Downton Abbey and Lady Jane Felsham in Lovejoy, her film credits include Another Time, Another Place (for which she won both Evening Standard and BAFTA awards), Mike Leigh’s Secrets and Lies and 1984.

Noel Coward’s Present Laughter is set in the 1930’s when the stars of the theatre were worshipped by their adoring public quite as much as Boy bands are by their fans today. Gary Essendine’s life is more of a Love tangle than a love triangle and leads to all sorts of complications!

The gentle humour and razor sharp wit that was the trademark of Coward is evident throughout the first half, slowly building up to scenes that might not look out of place in one of the better Whitehall farces in the second half. A wonderful performance by Samuel West as Gary Essendine, coping with the cutting sarcasm from his secretary Monica (beautifully played by Phyllis Logan) who has been with him for 17 years and has seen it all before! This production boasts a very strong cast playing eleven very different characters. Essendine’s luxurious apartment is the very detailed set designed by Simon Higlett all very lifelike from the skylight window to the parquet flooring. Hannah Bell is to be congratulated for choosing stunning costumes of the period that somehow didn’t look dated.

That could be said of the whole production, the humour and the predicaments that Gary Essendine finds himself in were all happening in the 1930’s and you very quickly notice that they are just as prevalent today!

A great night at the theatre and a far cry from the amplified Cacophony of sound that we are so used to with modern musicals that seem to be the staple diet of current touring theatre. Present Laughter is thoroughly recommended, get to see it at Milton Keynes Theatre if you can, it’s on its way into London but that might cost you very much more!