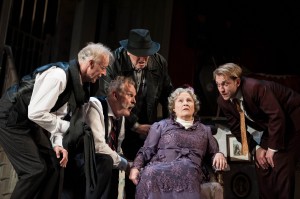 Graham Linehan’s hilarious adaptation of the classic Ealing comedy The Ladykillers is at Milton Keynes Theatre this week. This follows the critically acclaimed West End run at London’s Gielgud Theatre. The production was nominated for five awards in the 2012 Laurence Olivier Awards, including Best New Play, Best Direction, Best Set Design, Best Sound Design and Best Actress in a Play for Marcia Warren.

The Ladykillers tells the story of the eccentric little old lady Mrs Wilberforce who lives alone with her parrot in a strange lopsided house in King’s Cross. Her life is turned upside down by the arrival of Professor Marcus and his four friends, who between them make up the most unlikely group of criminals. Planning the heist of a security van, they decide to use Mrs Wilberforce as cover and involve her unwittingly in the plot. Things do not go well and the Professor’s plan starts to unravel in spectacular and hilarious fashion.

This stage production has been adapted by Graham Linehan, best known for being the writer behind TV comedy Father Ted . Directing is Sean Foley, multi award-winning stage director whose work in the West End includes The Play What I Wrote, Do You Come Here Often, Ducktastic, Pinter’s People and Joe Orton’s What The Butler Saw.

The newest member of the cast, Cliff Parisi, is best known for playing lovable rogue Minty in EastEnders.

Also in the cast is Chris McCalphy who plays One-Round and William Troughton who was part of the original West End cast of The Ladykillers, playing Harry.

The only lady in the cast, Mrs Wilberforce is played by Michele Dotrice. Michele is perhaps best known for her role as Betty, the long-suffering wife of the Michael Crawford character Frank Spencer.

The Ladykillers at The Milton Keynes Theatre, 23 – 26th January