The old saying “everyone’s a comic!” could well have been about this year’s pantomime Cinderella at the Milton Keynes Theatre. 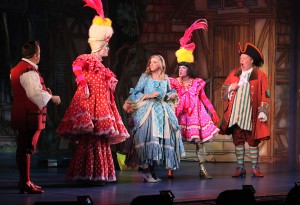 From the moment Buttons (Kev Orkian) comes bounding on the stage you know you are in safe hands. Kev proves his worth of star billing time and time again – his working of the audience is like a nightly masterclass! Although I’m not usually keen on artists breaking out of character just to do their act, in Kev’s case his cabaret at the piano in the ballroom seemed to fit in – and of course was executed with the skill of the seasoned professional that he is. Then, once our chuckle muscles had got to the aching stage, on came the Ugly Sisters, Peaches (Paul Burnham) and Pixie (John Barr). Possibly the best (or ugliest?) uglies on the circuit. Peaches as posh as Pixie is common. They were the perfect foil for each other, and the children sitting around me absolutely hated them! Their scenes with Cinders were absolutely wicked – in the original sense of the word! Their costumes too were as hideous as their make up! Just perfect! 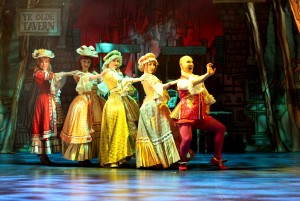 By the time the man who’d drawn in these huge crowds came on, we needed a miracle of a performance to make us laugh any more – and that’s exactly what Dandini (Louie Spence) gave us! Like Julian Clary on speed he whirled and twirled his way arround the stage – only pausing during one execution of the splits to inform us all that “I’m 43 you know!” One or two of his camp one-liners might have flown way over the children’s heads, but they hit the adults squarely between the eyes! You don’t go to see Louie Spence and not expect some great dancing and a wickedly camp sense of humour – and he certainly didn’t disappoint!

I was pleased to see for all the comedy, that the script took us through the classic story of Cinderella that we all love. With a handsome Prince (Andrew Derbyshire) – straight enough to be a good foil for Dandini, a delightful Cinders (Anna Williamson) and the first scat-singing Fairy Queen (Deniece Pearson) I’ve ever seen! The Baron was played in good old fashioned swashbuckling style by Tim Hudson.

As usual the production company, First Family are to be complimented on a great script by Eric Potts and their splendid sets and costumes! An evening of Glamour, Glitz, Sparkle and Theatrical Camp – Pantomime as it should be!