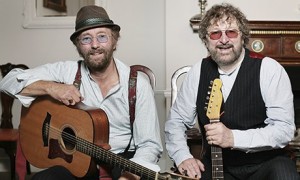 Following on from the release of their brand new album, “That’s What Happens ” and their headlining performance at The Royal Variety Show 2013,  Chas and Dave are back on tour and playing live at Watford Colosseum on Saturday 13th September.

Chas and Dave began writing and performing songs together in 1972, having been friends since the early sixties. Now they are celebrating their 50th Anniversary by recording their first original album in 27 years.  The album also features special guest stars such as Jools Holland, Buddy Holly’s drummer Jerry Allison and Hugh Laurie.

In the tradition of The Kinks and the Small Faces and around the same time as Ian Dury and Squeeze, Chas and Dave wrote and recorded exceptionally witty songs about life in London, performed with a strong affection for all things English reminiscent of many of the great Music Hall artists many years previously. In their case, however, the musical accompaniment to their sharply observant material was neither rock nor punk but solid, no-nonsense Rock’N’Roll style which had been their background and inspiration.

They reached the top twenty in 1979 with “Gertcha“, which became a nationwide catchphrase. This was followed by “The Sideboard Song (Got My Beer in the Sideboard Here”). In 1980 they hit the charts with “Rabbit“, which reached No. 8 in the charts and a No. 2 record in 1982 “Ain’t No Pleasing You“. This was followed by further hits “Margate“, “London Girls” and in 1986 they had a top six record with the infectious “Snooker Loopy“.

Chas and Dave are great musicians and know how to give an audience a great time. They have gained a cult audience of both young and old and due to public demand they are about to be seen together on stage once more.