Don’t get me wrong, the entire cast gave us an evening of fun and laughter, great music and some fine dancing, but the evening belonged to Mr Smee (Andy Collins) and Captain Hook (Steven Serlin) who made the show for me – and the young brother and sister sitting two seats from me! The double act of Smee and Hook also worked together perfectly, producing exactly the right reaction from the packed audience. 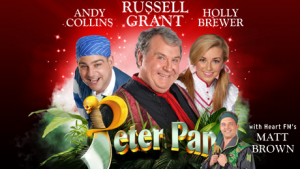 Guest star Russell Grant playing the most bejewelled and bling covered cabin boy I’ve ever seen was as popular as ever with some very good camp one-liners. Adam Pettigrew made a wonderful Peter Pan having mastered the art of flying (having tried it I can tell you that’s no mean feat!) he was the boy who sulks occasionally, but is always loveable and you could believe that he never would actually grow up!

Milton Keynes vocalist Holly Brewer was convincing as Wendy and sang very beautifully even though her main solo seemed to me to be a rather inappropriate adult love song from the oldest daughter in the Darling family to a boy who never grows up!

The Divas (Bobbie Gordon & Ngozi Ugoh) looking like two thirds of the Supremes were a real innovation acting as narrators with some very fine renditions of songs the mums and dads could sing along with.

The wonderful sing along routine devised around the 12 days of Christmas led by Andy Collins as Mr Smee was a real highlight for me, making such a refreshing change from the usual “Ghost – Its behind you” routine!

Steven Serlin (last year’s King rat) was the most perfect Captain Hook I’ve seen! He worked the audience – including the grown ups – so well in a laid back “I love you to hate me” fashion, that when his time came for the traditional Walkdown we really couldn’t decide whether to cheer or to boo, we settled on booing of course!

Special mention too must go to Terry Parsons for the absolutely first class costumes and the story-book sets and to local man Bob Bustance as lighting designer.

All in all an absolutely first class show that the Waterside Theatre can be very proud of. It’s an evening full of action that is not too long for its young audience to stay glued (or Hooked?) to the story line throughout. Don’t miss it – it runs until 30th December.

Peter Pan at The Waterside Aylesbury from 8th – 30th December.