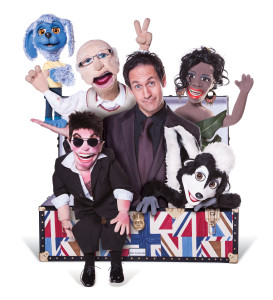 Fresh from his stunning appearance on Britain’s Got Talent, top comedy ventriloquist, Steve Hewlett, now embarks on a major theatre tour with his hilarious friends, which comes to the Gordon Craig Theatre on Wednesday 25 June.

Steve, who will be appearing in Robin Hood at The Grove Theatre, Dunstable this year with the legendary Australian Soap actor Alan Fletcher, who plays Karl Kennedy in Neighbours, shot to fame on last year’s BGT, winning over the public vote to become the Wild Card Finalist in the show. He memorably surprised Simon Cowell when he brought Little Simon and Little Sinitta – creating huge cheers from sitting rooms all over the UK!

Now Steve and his cast of zany characters,  Little Simon, Little Sinitta and everyone’s favourite Arthur Larger, along with international award winning illusionist Richard Griffin, take a brand new, spectacular show on the road to delight and amaze the whole family – and their next stop is Stevenage!