A spectacular new staging of Saturday Night Fever, packed with legendary hits from the Bee Gees including the classics Stayin’ Alive, Night Fever, Jive Talking, How Deep is Your Love? and You Should Be Dancing arrives at the Milton Keynes Theatre from 24th – 28th February. 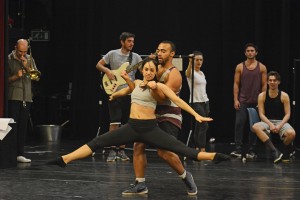 The date is 1976 and in New York, Tony Manero, a young man from a tough Brooklyn neighbourhood with a dead-end job and an extraordinary ability to dance, has only one ambition in life – to become the disco king.  Every Saturday night, Tony dons his flares and hits the dance floor, creating a stir as he wows the crowds with his phenomenal moves and routines. When he meets Stephanie, who also dreams of a world beyond Brooklyn, and they decide to train together for a dance competition, their lives begin to change forever.

The role of Tony Manero is played by Danny Bayne, who made his West End debut as Danny Zuko in the musical Grease. He starred in that show in the West End for two years and performed the role on tour. He returns to the role of Tony Manero after touring the US in Saturday Night Fever. A talented dancer, he has achieved the status of British Champion in Freestyle, Hip Hop, Latin American and Rock ‘n’ Roll.

Naomi Slights plays the role of Stephanie. Her credits include Mamma Mia! in the West End, 20th Century Boy on UK Tour, Thank You For The Music at Hyde Park, and she returns to the role of Stephanie after starring in Saturday Night Fever at Frankfurt’s English Theatre. 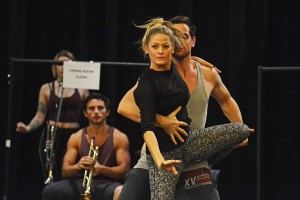 Andrew Wright won Best Choreographer at the WhatsOnStage Awards 2013 for his choreography of the West End production of Singin’ in the Rain.   Earlier this year, he choreographed the UK Tour of Barnum starring Brian Conley, the UK tour of Betty Blue Eyes and his award-winning choreography on Singin’ In The Rain has been seen nationwide on tour.

The show is directed by Ryan McBryde whose previous productions range from the RSC’s 50th Anniversary Gala to the German premieres of the musicals Spring Awakening and The Full Monty.  He also directed Saturday Night Fever for Frankfurt’s English Theatre. He was Resident Director for the West End musical Billy Elliot; and his production of Hamlet! The Musical at Northampton’s Royal and Derngate and Richmond Theatre, won the WhatsOnStage Theatregoers’ Choice Award.