BLOFELD AND BAXTER – MEMORIES OF TEST MATCH SPECIAL at the Lighthouse Theatre, Kettering on 21st May and Swan Theatre, High Wycombe on 11th June 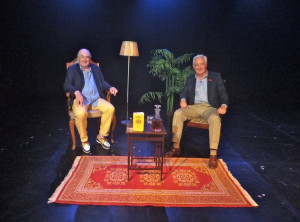 The fun spills out from the globe’s most famous grounds to taxis, buses, beaches, deserts and hotels. Anecdotes never before heard of the most legendary players – in every sense of the word – from the last forty years are finally aired. A side-splitting show full of memories from within the Test Match Special commentary boxes all over the world.

Henry Blofeld began to write about cricket for The Times in 1962. Ten years later when he joined the famous Test Match Special team for two one-day games against Australia and he has been clogging up the airways on that programme ever since.

Everywhere he has gone, on countless cricket tours around the world, Blowers has lived life to the full regarding each day as an orange and squeezing it dry of the last drop of juice before moving onto the next day. He is a medical freak having defied a heart by-pass operation which went horribly wrong, a gall bladder that behaved like a deprived monster, picking up the dreaded MRSA along the way. Since then, back and hip operations have followed two-a-penny, but all have been submerged by guffaws of laughter and bottles of Burgundy (both red and white) and life still goes on in capital letters. Blowers has always been and continues to be outrageous and irresistible fun!

Peter Baxter was the producer of the great cricket institution Test Match Special for BBC Radio for 34 years. During his tenure on the show Peter worked alongside the legendary John Arlott, the inimitable Brian Johnston and, of course, the unforgettable Henry Blofeld and ushered in new faces, such as Jonathan Agnew, who continue to entertain, inform and charm listeners today.

He has spent a lifetime in radio broadcasting, retiring from the trade in June of 2007. He is also the author of Cricket’s Greatest Battles. World Cup: Cricket’s Clash of the Titans, Cricket’s Big Day Out, Out of the Rough: England v West Indies – Highlights Since 1948 and The Ashes: Highlights Since 1948. and has edited many titles including Test Match Special – 50 Not Out.

Blofeld & Baxter are at Lighthouse Theatre in Kettering on  Wednesday 21st May.

and on Wednesday 11th June at The Old Town Hall at The Swan Theatre, High Wycombe