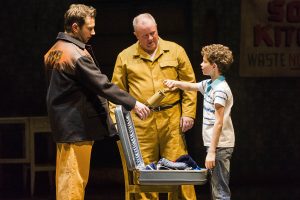 Billy Elliot the Musical is set in a northern mining town, against the background of the 1984/’85 miners’ strike, Billy’s journey takes him out of the boxing ring and into a ballet class where he discovers a passion for dance that inspires his family and whole community and changes his life forever. 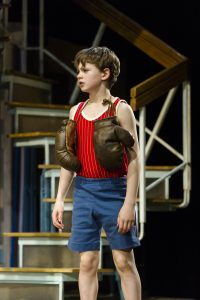 Acclaimed by audiences and critics alike, Billy Elliot the Musical has now been seen by nearly 11 million people across five continents and is the recipient of over 80 awards internationally, including ten Tony Awards and five Olivier Awards. In 2006, Liam Mower, James Lomas and George Maguire, the first three boys to play the title role, became the youngest performers ever to have won the Olivier Award for Best Actor with the show also picking up the Best Musical prize. 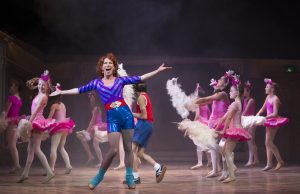 I saw the opening night and I’m sure that even though it’s at MK for three weeks, when that 1st night audience gets a chance to spread the word, you won’t get a ticket for love nor money! The word I fully expect them to spread is Stunning, Stunning, Stunning!

From the opening seconds until the fantastic finale this talented cast had a packed theatre spellbound! The set, swapping from church hall to Billy’s home (plus a few surprise extras) was efficient, interesting and at times spectacular.

I was particularly taken with the Peter Darling’s choreography perfectly coping with such difficult scenes as when the tough miners, the slightly comic policemen and the little ballerinas are all on stage doing the same routine and not one of them looked out of place!

For those of us that remember the difficult times of the miners’ strikes the story is not only gripping but absolutely plausible – the audience experiencing emotions that range from fun and laughter to anguish and even fear. People of all gendres were shedding tears, and I don’t mean tears of laughter.

A superb job done by the entire cast, but special mention has to go to the Billy on duty on our night Haydn May (I’m sure the other three Billy’s are equaly as talented) what a strenuous performance to get through each time! Haydn looked as though he thoroughly enjoyed every second, as we his adoring audience did! Dad brilliantly played by Martin Walsh, has a difficult time as a member of the very manly mining community coming to grips with the fact that his son wants to be a dancer. Anna-Jane Casey had the full sympathy of the audience – especially when she decides to stand up to Dad and elder son Tony (Scott Garnham) who cannot see further than mining being a tradition and no other way could possibly work.

Dont expect an easy night watching an inconsequential musical, this is hard hitting and gritty, but you will probably spend the final ten minutes standing, cheering the cast as we did!

DO NOT MISS THIS PRODUCTION – IF THERE’S A SINGLE TICKET LEFT!