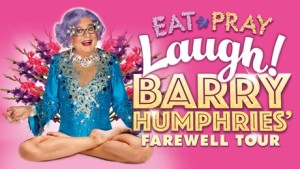 More years ago than I care to remember – which is just as well because its rude to even hint at a lady’s age – I saw a huge flashing sign in London’s Piccadilly Circus. It was in the form of a large pair of ornate spectacles behind which one of a pair of carefully made up eyes winked at me provocatively and a moving thumb directed me, all was explained with the flashing slogan “Young Australian Girl, cheap, just round the corner” That was the beginning of my fascination for and adoration of Edna Everage, Housewife & Superstar (I’m pretty sure she hadn’t been made a Dame at that time)

Little did I think that so many glittering successes later I would be there to witness her farewell extravaganza “Eat, Pray, Laugh! Barry Humphries’ Farewell Tour” which opened the British leg of it’s world tour at The Milton Keynes Theatre last night. 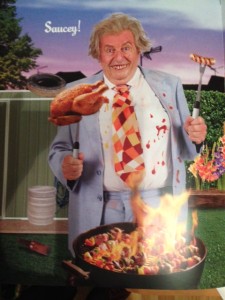 The first half belonged to Sir Les Patterson showing off his culinary skills (and his bowel problems) and informing those of us that had been hoping for a politically correct evening just where we could go! Sir Les has lost none of his “qualities” with the passing years and I would think that this tour will make him very many new fans.

The deceased Sandy is a favourite of many and an aquired taste for some with his look at life – and in this case care homes, bringing a wry smile to most and was a welcome breather between Sir Les Patterson and the onslaught of Dame Edna that was to come in the second half! 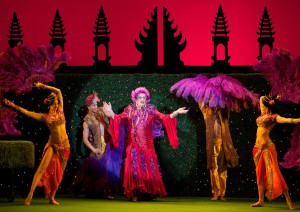 Dame Edna Everage was greeted at the opening of the second half with such an outpouring of love from a packed house that it was really quite emotional. In fine form she set about members of the audience (“I say this with all tenderness”) with some probing questions (“Do tell us, what was that before you made it into a dress?”) family anecdotes – the high security care home that looked after her mother and the headaches involved with having a daughter like Valmay who apparently has so many body piercings these days that she tends to whistle in a strong wind! Dame Edna even found time to save the marriage of a couple in the audience that she had decided was on the rocks!

There are one or two other surprises in the show and if you are lucky enough to obtain tickets for this week at Milton Keynes Theatre I’m certain you will end the night singing along and waving your gladdy with the best of them!

Eat, Pray, Laugh! Barry Humphries’ Farewell tour is at Milton Keynes Theatre until Saturday 26th October (with a matinee for those that dare!)

After that the show is heading for Cardiff and Edinburgh before coming into The London Palladium from the 13th November until 5th January.