Ist Family have two spectacular pantomimes in our area this Christmas. The first one I got to see was Aladdin at the Aylesbury Waterside Theatre – and it was fabulous!

All the usual panto ingredients were there of course and the excellent cast headed by Michelle Collins made the entire evening so enjoyable with their energy and enthusiasm – not to mention their professional skills! 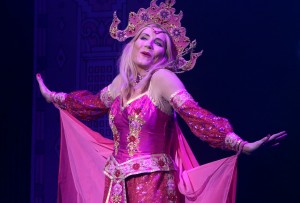 Michelle Collins made a very funny and slightly scatty Genie of the ring, delivering lots of the comedy lines & panto puns beautifully. Ive seen her quite recently in a musical so I knew she could sing, but this was a revalation to me that she has such great way with comedy. 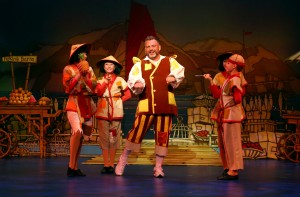 Most of the physical comedy was left to regular Waterside comedian Andy Collins who was a great Wishee Washee and got more out of The Twelve Days of Christmas routine than I’ve seen elsewhere. The energy that man puts into his performance almost has you fear for his heart!

Widow Twanky was played by La Voix and I have to admit that before the show I wondered if we were about to witness the thing I hate most – the dame being played by a drag act. But I couldn’t have been more wrong! The dear widow was wonderful, in fact I would say the best panto dame this year and for some time in my estimation! 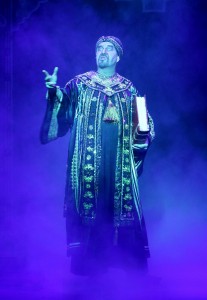 I loved Abanazar as played by Nicholas Pound, he was very powerful and really nasty just as he should be. Nicholas put me in mind at times of that lovely actor sadly no longer with us Bill Fraser and in my book that’s praise indeed!

Danny Colligan was just right as Aladdin and had chance to show off his great singing voice. Joel Ekperigin was the most acrobatic Genie of the Lamp ever, getting a round of applause almost every time he cartwheeled onto the stage.

If you want a pantomime with fantastic sets, lots of music and a great cast look no further than the Waterside Theatre in Aylesbury this year. In my opinion the top panto in this area this year!

Aladdin is at The Waterside Theatre Aylesbury until 31st December 2016