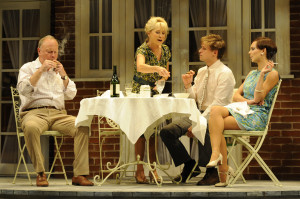 I can’t think where I’ve been not to have seen this particular Ayckbourn classic before. But I’m glad the cast led by Felicity Kendal were the ones to enlighten me! Jonathan Coy as Philip whose dark secrets are in danger of being found out and Felicity Kendal as his wife Sheila who doesn’t quite understand what’s going on but accepts it never the less are quite, quite brilliant, with some comedy timing to die for! I was so pleased to discover that the art of the pause is still alive and kicking!

Do get to see this if you can, you won’t be disappointed!

Kara Tointon and Max Bennett (Ginny & Greg) are the perfect foil for each other – and for Philip & Sheila. This wonderful foursome make up the cast with of course Alan Ayckbourn at his very best!

This new  production of Alan Ayckbourn’s hilarious comedy of misunderstandings, Relatively Speaking has been selling out across the Uk. Now MK audiences have a chance to catch this perfectly-cast and wonderfully funny comedy, as Relatively Speaking comes to Milton Keynes Theatre with all-star cast Felicity Kendal, Jonathan Coy, Kara Tointon and Max Bennett.prior to its West End transfer to Wyndham’s Theatre.

Greg only met Ginny a month ago but he has already made up his mind that she’s the girl for him. When she tells him that she’s going to visit her parents, he decides this is the moment to ask her father for his daughter’s hand. Discovering a scribbled address, he follows her to Buckinghamshire where he finds Philip and Sheila enjoying a peaceful Sunday morning breakfast in the garden. The only thing is – they’re not Ginny’s parents!

Much loved for her illustrious television and stage career, Felicity Kendal stars as Sheila. When this production transfers to Wyndham’s Theatre, it will be the first time that Felicity Kendal has starred in a play by Alan Ayckbourn in the West End since 1974; when she performed in The Norman Conquests and received the Variety Club of Great Britain Award for Best Newcomer.

Jonathan Coy stars as Philip. His many television credits include the BAFTA Award-nominated BBC2 series Parade’s End and the first three series of Downton Abbey.

Kara Tointon stars as Ginny. Best known for her long-running role as Dawn Swann in more than 330 episodes of EastEnders, she won BBC1’s Strictly Come Dancing in 2010.

The role of Greg is played by Max Bennett, whose recent stage work includes the Royal Court production of Posh in the West End.

One of the world’s greatest living playwrights Alan Ayckbourn is the author of 77 plays. He received The Laurence Olivier Awards Special Award; and in 2010 he was presented with a Special Tony Award for Lifetime Achievement in the Theatre.

Lindsay Posner directs Relatively Speaking fresh from a string of plaudits for his productions of Noises Off at London’s Old Vic and Abigail’s Party in the West End.

Relatively Speaking at the Milton Keynes Theatre  from 6th – 11th May