Royal & Derngate’s Made in Northampton season continues with the multi-award-winning Dancing At Lughnasa, by Irish playwright Brian Friel. This tender and moving yet funny play takes to the Royal stage from Friday 24 May to Saturday 15 June. 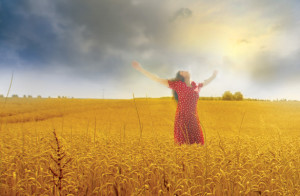 Set in rural Donegal in 1936, at a time when life was simple but making ends meet seems impossibly hard, the play follows the five Mundy sisters as they laugh, cry and dance together.

During the course of a summer when their missionary brother returns from Africa a frail and changed man and the sisters get their first wireless radio, relationships are tested, social conventions challenged and the doctrines of the church clash with the spirit of a Pagan past.  Dreams of love crumble as dusk sets on the life the sisters knew.

Told through the eyes of seven-year old Michael, the illegitimate son of one of the sisters, this is a magical, moving, memory-story filled with humour, tenderness and the longing of unfulfilled lives.

First performed at the Abbey Theatre in Dublin in 1990, the play transferred to London’s National Theatre the next year, winning the Olivier Award for Best Play and to Broadway where it added the Tony Award for Best Play to a growing clutch of awards.

Richard Beecham returns to Royal & Derngate to direct after his critically-acclaimed productions of Terrence Rattigan’s In Praise of Love and Charlotte Jones’ Humble Boy. The talented cast includes Milo Twomey, who starred in the hugely popular Brief Encounter, which Royal & Derngate co-produced with Kneehigh.

Dancing At Lughnasa can be seen from 24 May to 15 June.

Box Office: 01604 624811 or online: www.royalandderngate.co.uk. (Customers booking as part of the Made in Northampton 2013 subscription season can make significant savings.)