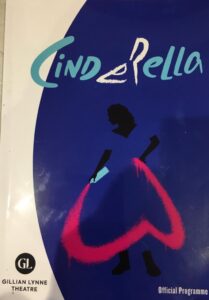 Saw the show this week in the Gillian Lynne Theatre, Drury Lane. After purchasing the New London Theatre halfway through the Run of Cats, Andrew later decided to rename it after the show’s wonderful Choreographer Dame Gillian Lynne. During the recent pandemic he seized the chance to to completely refurbish, especially the air conditioning and the seating. It now boasts a 100% fresh air ventilation system and of course a good view of the stage from every one of it’s comfortable new seats. The theatre has an enormous revolve which you’ll find out about when you get to see Cinderella!

So, what about the show? With book by Emerald Fennell, lyrics by David Zippel and music by Andrew Lloyd Webber it has a pretty good start.

It is very clever, but very different, which you realise about four minutes into the opening chorus. It is amusing that as the show starts the audience slowly catch on from the lyrics of the opening number by the ensemble, to the fact that our Cinderella might not be the text book blonde and beautiful fairytale princess!

There are apparently two princes, Sebastian – played to perfection on the night we went by understudy Michael Hamway I think (because there was no note in the programme or announcement). We are informed that Prince Charming is away, presumed lost at war. The Queen ( Rebecca Trehearn) and the Stepmother (Victoria Hamilton-Barritt) have some wonderful comedy moments both together and with their fledglings. Cinderella’s Step Sisters are two blonde numpties that look as though they’re direct from TOWIE. Great fun and well played by Georgina Castle and Laura Baldwin.

We first meet Cinderella in all her Doc Martined glory as she is discovered adding graffiti to a statue. I think the casting of Carrie Hope-Fletcher for this part was inspired!

There’s a lot of interesting new music in the show and during Cinderella’s soliloquy the audience were spellbound.

By the way, don’t fret about Prince Charming (Caleb Roberts) – he does arrive eventually – and when he does all I will tell you is that you’ll remember his entrance and song for a very long time!

The standing ovation at the end of the show was proof it it were needed that Lord Lloyd-Webber has yet another hit on his hands….

Cinderella is at the Gillian Lynne Theatre, Drury Lane until at least May 2022.