When Agatha Christie says: ‘And Then There Were None’, you had better be afraid, be very afraid… 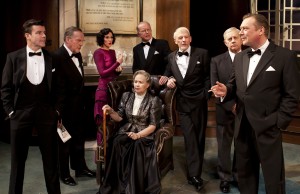 So you think you know how an Agatha Christie plot gets resolved do you?
M. Poirot, a dapper, moustachioed Belgian detective with an abnormally large number of leetle grey cells, unmasks the murderer by a process of extraordinary deduction?
Or Miss Marple knits her way to solving a dastardly crime because an old friend of the sweet, grey-haired old lady had a cat that behaved in exactly the same way?
Well now you can think again.

And Then There Were None is the Queen of Crime at her darkest and most chilling. It’s also the most popular work of Christie’s long and brilliant career. But in the case of the ten invited guests on a remote, storm-lashed island off the coast of Devon, help from any quarter is not at hand or even on the cards.
With their host, an eccentric millionaire, missing and a recorded message accusing each of them of having a guilty secret, one by one the visitors begin to die. With only the victims believed to be innocent, who amongst those who are left can be the killer? The list of suspects shrinks with every new murder.
The Agatha Christie Theatre Company has assembled a stellar cast of actors for this, their 10th anniversary production. 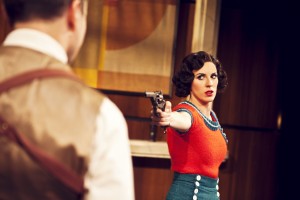 It takes a few minutes to get into this period piece, but once you do this strong cast keep you gripped all the way to the unhappy conclusion. If you like a whodunnit this is probably Agatha Christie’s most popular. An ingenious plot that really keeps you guessing until the final moments!