Mike Bartlett’s new play An Intervention is at the Watford Palace Theatre until 3rd May. 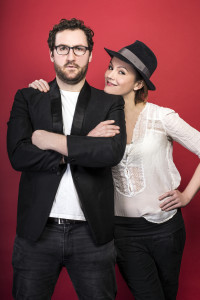 Starring Rachael Stirling as A and John Hollingworth as B

An Intervention is the latest co-production from Watford Palace Theatre and Paines Plough, the company behind last spring’s award-winning Jumpers for Goalposts; and forms part of Paines Plough’s 40th Anniversary Season.

Rachael Stirling played the title role in Watford Palace Theatre’s co-production of Medea in 2012 – adapted by Mike Bartlett – and has more recently starred in ITV’s The Bletchely Circle. John Hollingworth returns to Watford following his role in Out of Joint’s Our Country’s Good in 2012.

Two friends. One of them went on the anti-war protest, shouted their lungs out, then got horrendously and staggeringly drunk. The other stayed at home, watched TV for a bit, and thought about the future.

Judi Herman has written a review of An Intervention and you can read it by clicking on “Theatre Reviews” above.

An Intervention is at Watford Palace Theatre until 3rd May