J.B. Priestley’s classic thriller, An Inspector Calls has won more awards than any other play in history and been hailed as the theatrical event of our generation. Now, Stephen Daldry’s National Theatre and West End production of the play returns to Milton Keynes Theatre from Mon. 22 – Sat 27 Feb. 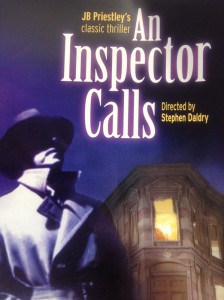 A peaceful family dinner party at the home of the successful and comfortably smug Mr and Mrs. Birling (Geoff Leesley & Caroline Wildi) is shattered by the arrival of Inspector Goole, (Liam Brennan) a local police inspector. His investigations into the death of a young woman shake the very foundations of the lives of each of them and, in doing so, challenge us all to examine our consciences.
Just over 70 years since it first premiered, Daldry’s visionary production unites the 1912 setting of Priestley’s play with the post-world war two period in which it was written. Ian MacNeil’s astonishing set design, an award-winning star act in its own right, evokes a bombed wasteland over which the Birling family’s Edwardian home (and indeed the life of those within) teeters precariously, in imminent danger of crumbling into ruins.

An Inspector Calls has electrified audiences around the world with its epic and wildly imaginative staging, raw emotion, evocative score, lashing rain and chilling suspense.

An Inspector Calls is at The Milton Keynes Theatre until Saturday 27th February.

The MK Theatre was packed for the opening night including very many young students – but my fears of a noisy audience for this thriller were unfounded. From the opening moments the entire audience were spellbound!

The set by Ian MacNeil (described above) works beautifully for this intriguing night of twists and turns! The quiet but firm manner in which Liam Brennan’s Inspector Goole takes complete control of the family deserves special mention, but this is most certainly an ensemble piece. You feel for each member of the family as their turn comes for a “chat” with the Inspector. J B Priestley keeps us all guessing about all manner of things, not least who, if anyone was guilty! If I used a star system, this production would get ten!