The Hollies at the Grove Theatre, Dunstable on Friday 15th March 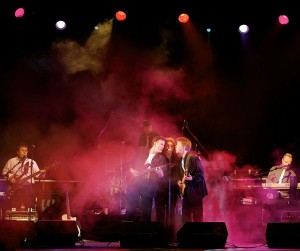 The Grove Theatre will be welcoming to their stage a band that, along with The Beatles and the Stones, helped shape the world of Pop and Rock into what we know today. This band is of course none other than The Hollies.

No support act is needed as The Hollies enthusiastically perform their classics – The Air That I Breathe, Bus Stop, Carrie Anne, Jennifer Eccles, Stop,Stop,Stop, Just One Look, He Ain’t Heavy – He’s My Brother, On A Carousel and much more in a two hour plus celebration of all things Hollies.

The Hollies hallmark vocal harmony has not wavered throughout fifty years of continuous touring, performing and recording. From 1963 through to the mid-70’s, The Hollies had more hits than even The Beatles. Recently the band were honoured by the prestigious American Rock n’ Roll Hall Of Fame – ‘For their Impact on the Evolution, Development, and Perpetuation of Rock n’ Roll’.

At the heart of The Hollies since 1963, are the integral, original members; drummer Bobby Elliott and singer, songwriter and lead guitarist, Tony Hicks. The Hollies are one of Britain’s best loved groups. Their soaring, distinctive harmonies, brilliantly crafted songs, and cultivated, often experimental musicianship, coupled with their extensive back catalogue of hits, has ensured the longevity of one of our greatest Pop/Rock bands whose music remains fresh, familiar, and timeless.

This year, The Hollies on The 2013 UK Spring Tour, will be promoting Hollies Live Hits – We Got The Tunes! – a double album produced and mixed by triple Grammy award winning Paul Hicks.

The Hollies at The Grove Theatre, Dunstable on Friday 15th March