An August Bank Holiday Lark by Deborah McAndrew ends its run at Watford Palace this weekend – but you can still see it at the Oxford Playhouse Theatre from 13-17 May. 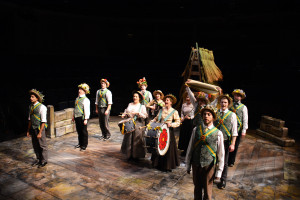 In rural Lancashire, 1914, excitement is building for the annual Rushbearing Festival – singing, dancing, drinking and courting – and a rest from working the field. The looming war is barely registering…but it will.

An August Bank Holiday Lark follows one village on the brink of change, witnessing the transition from exuberance to a devastating loss of innocence.

Marking 100 years since World War One began, this gentle drama tells a story that is both entertaining and deeply moving.

Following the success of Rutherford & Son, the multi-award winning Northern Broadsides returns with a charismatic cast of actor-musicians, directed by Barrie Rutter, for a story of rural life that will never be the same again.

Judi Herman says she was thrilled and moved by a truly great evening in the theatre! For her full review of the play please go to “Theatre Reviews” at the top of this page.

An August Bank Holiday Lark is at Watford Palace Theatre until 9 May. then Oxford Playhouse from 13-17 May

Tour continues until 14th June. Details can be found at: http://www.northern-broadsides.co.uk/index.php/coming-soon