Joe Pasquale, the star of stage, screen, reality TV and blissfully funny comedy, will lead the cast in the role of Aladdin’s hapless brother, Wishee Washee.
Joe is well-known and best-loved for being one of the hardest-working and top-selling live comedians in British comedy today. He’s been delighting audiences for more than 20 years with his live stand-up tours and infectious sense of fun.
Along the way he’s voiced characters for Hollywood movies, toured in several major theatrical productions including Mel Brooks’ The Producers, starred in the West End production of Spamalot (and brought the show to Milton Keynes) and has been crowned King of the Jungle in ITV’s I’m A Celebrity… Get Me out Of Here.
Joe has appeared at five Royal Variety Performances and toured the UK in a live stage incarnation of the classic sitcom Some Mothers Do ‘Ave ‘Em in the iconic role of Frank Spencer. MKT panto audiences won’t know what’s hit them! 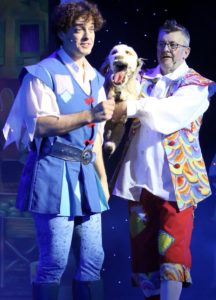 Best-known for winning the BBC talent show Any Dream Will Do, Lee Mead plays our hero, Aladdin. Lee won the title role in the West End revival of Andrew Lloyd-Webber’s Joseph and the Amazing Technicolor Dreamcoat to rave reviews. Since then he has had lead roles in Wicked and Legally Blonde in the West End, released several solo albums and toured
e x t e n s i v e l y.
No stranger to pantomime, Lee has starred in six Qdos Entertainment pantomimes, including his star turn as Prince Charming in their critically acclaimed production of Cinderella at the London Palladium. Lee starred as Ben “Lofty” Chiltern in Casualty, being nominated for various national Best Newcomer television awards, a role he now reprises in the popular BBC spin-off series, Holby City. 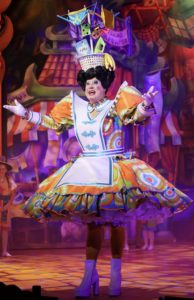 There is nothing like a dame, as David Robbins, the fragrant Widow Twankey, well knows. David originally trained as a stage manager specialising in wardrobe and prop making and is also a trained puppeteer and director of the Dab Hand Puppet Company.
He has worked as an actor in the West End, at Chichester Festival Theatre and on tour. 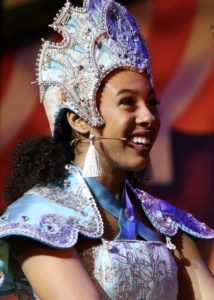 Aladdin will be at the Milton Keynes Theatre until 12th January, 2020.

Aladdin has it all!

It was a great move bringing back leading Pantomime producers Qdos back to Milton Keynes. People were still talking about last year’s Robin Hood when this stunning production arrives! Aladdin is everything a pantomime should be  – and more!

From the moment the band strikes up and our excellent villain -who actually tells the audience off if they DON’T boo him – comes on, we are putty in the hands of this skilful cast.

Joe Pasquale and Lee Mead work so well together, Lee managing to keep a straight face through all the mayhem and ad-libs from funny (very funny) man Joe.

David Robbins, I’m told, spends most of the year designing and making his own costumes which I have to say are wonderfully wacky, very colourful and great fun. David is fast becoming one of the country’s top pantomime dames. Here we have an expert who knows exactly how to pitch the humour and most certainly knows that a pantomime dame is very different to a drag act!

Plenty of visual gags from Mr Pasquale that you won’t have seen in other pantomimes and some spectacular effects! Speaking of spectacular, the sets and costumes are exactly that from the 3D carved serpent proscenium arch onwards. For pantomime nuts like me, watch out for one of the best versions of the “If I Were Not…..” routines you’ll ever see!

Verdict: The best for ages. Book a coach, gather the whole street and then beg for some tickets.   I’m told that Best availability before Christmas: Friday 20th December at 7p Get there before it sells out! Congratulations to the whole team.

Aladdin will be at the Milton Keynes Theatre until 12th January, 2020.